Advance Base – A Shut-In’s Prayer

by Martyn Young
published: 21 May 2012 in Album Reviews
Tweet 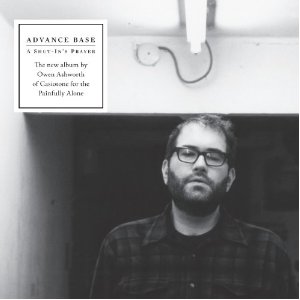 There has been much said in the past few years about contemporary music’s obsession with nostalgia and referencing the past. What is undeniably true though is that music with a nostalgic tinge can sometimes be extremely powerful. For musicians nostalgia is often an incredibly overpowering feeling, one that provides a great deal of creative inspiration. Advance Base, the new project of Owen Ashworth, formerly of Casiotone For The Painfully Alone, know all about the emotive power of nostalgia. Ashworth’s debut album under his new moniker is a bittersweet ode to lost love and days gone by, and it’s filled with gentle pieces of reflection.

A Shut-In’s Prayer is Ashworth’s first full length release in three years but sonically the album very much remains in the mainly lo-fi territory that he occupied with Casiotone. The music is sparse and the album is clear and concise, clocking in at only 34 minutes long. The instrument of choice is a Rhodes electric piano and Ashworth’s twinkling piano melodies dominate. The strong piano coupled with only a drum machine and the occasional autoharp mixed in with the ambience of the cramped and confined environments in which the album was recorded, both at home and in practice rooms at the Chicago library, give the album an engaging intimacy that allow you to fully immerse yourself in Ashworth’s reflective tales.

A Shut In’s Prayer veers between the desperately sad and the strangely uplifting. This is evident on opening track Summer Music which sees Ashworth wistfully lamenting a lost love. Ashworth describes her as “Her in the summer dress” and goes on to say in that doleful deadpan voice of his, “She left with my happiness.” The repeated line about the “Sound of music from the kitchen boom box” is one that we can surely all relate to. The person that we miss is long gone but the memories and the things that remind us of them eternally remain. It is Ashworth’s skill as a songwriter to constantly tap directly in to those feelings and he does that repeatedly on this album.

The album proceeds with an endearing delicateness. The melodies are simple yet incredibly effective with Ashworth’s gentle croon and spoken word vocals mixing nicely with the understated instrumentation. The sparseness of the sound allows the emotion of the extremely detailed lyrics to seep through. A lot of the album gazes back to childhood, a theme explored in the lovely ballad Christmas In Oakland and in Riot Grrrls. In the latter Ashworth creates the character of two teenage school outcasts who form a bond yet grow apart as the crushing inevitabilities of adulthood take hold, “Meg went crazy and we lost touch, I’ve got kids of my own now.”

Ashworth also references his own family memories in his typical idiosyncratic way. The impossibly beautiful My Sister’s Birthday is perhaps the best piece here. Ashworth outlines the differences he shares with his sister over a gorgeous piano waltz before delivering the emotionally crushing line, “When we were kids she stuck up for me when no one else did”. It is a heartbreaking line, but one that offers a real sense of hope.

There are echoes of Eels and the equally confessional work of Mark Everett here, but where Ashworth truly excels is the sheer quality of his songwriting. His ability to conjure up just the right lyric and image to tug at the heartstrings in a way that is not saccharine or cloying but just truly, brutally honest is particularly effective. Coupling the stark lyrical honesty with the understated beauty of the melodies and instrumentation produces an album that that will stay with you for a very long time indeed.

Advance Base MP3s or CDs

Advance Base on Spotify