Aidan John Moffat – I Can Hear Your Heart 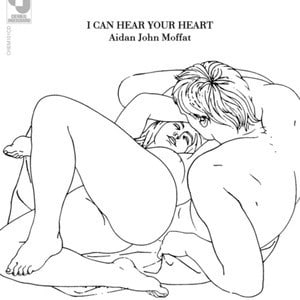 The idea of a ‘poetry album’ may well strike fear into your heart. An album of poetry and prose about bleak, unfulfilling sex, punctuated by swearing and delivered in a thick Glaswegian brogue, may well have you reaching for the razor blades – especially in that most depressing of months, January.

Yet this is Aidan John Moffat, half of Arab Strap and previously known as L Pierre, so you know more or less what you’re getting into at the start. Moffat has been a master at chronicling the seedier side of life, and for this, his first solo album under his own name, he surpasses himself.

I Can Hear Your Heart, while being proudly lo-fi, is also staggeringly ambitious. Starting with a short story in the liner notes entitled Poop (Moffat advises the listener on the opening track to read this story before proceeding otherwise the next 40 minutes won’t make much sense), and mostly consisting of spoken word pieces over samples of lounge music, bagpipes, strings, and the odd scattered beats, it demands the attention of the listener.

It’s not easy listening, as a glance at the track listing with titles like Cunts, Fuck It and an interlude of a poem consisting of every kind of racist epitaph you can think of would suggest. Yet there’s something about the way Moffat delivers these seedy tales that keep you listening.

Nothing In Common describes an incompatible relationship (“so we were talking about music and records, but every song you played me was shite”) over an easy listening jazz sample, while the hauntingly sleazy Super Sexxxy Real Live tales the dark tale of going to see a sex show while some terrifically haunting Bernard Herrmann-style strings screech in the background.

There are tales of brief moments of infidelity (Party At Your Boyfriend), a Dorothy Parker poem sung in Moffat’s imimitable Scottish drawl and set to an accordion, and even voicemail messages from an enraged man (you’ll have to read the short story for that one to make sense).

There are moments of tenderness in amongst the bleakness though. International Valentine takes some heartbreaking strings while Moffat waxes lyrical over a long-distance romance, while the closing story Hilary And Back describes gatecrashing a 16 year old’s birthday party, nearly sleeping with the birthday girl and befriending her mother and a random stranger at a bus stop – all the characters sketched with real love and affection.

Admittedly, there are moments that are just a bit too much – an incongruous cover of Bruce Springsteen‘s Hungry Heart does rather sound like chucking out time on the streets of Glasgow, while the drone of I’m Not Bitter may test even the most patient of listeners.

As Moffat states in his sleeve notes, this is best listened to “in bed, with headphones, preferably with a hangover”. It’s not going to work on shuffle on your iPod. You may not even want to listen to it that much – you definitely have to be in a certain type of mood to fully appreciate Moffat’s worldview.

Yet if you’re missing Arab Strap’s uniquely gritty tales of life and find Moffat’s former colleague Malcolm Middleton a bit too upbeat and cheery (well, as cheery as the We’re All Going To Die man can get…), then there’ll be plenty to keep you intrigued here.