Aidan Moffat – How To Get To Heaven From Scotland 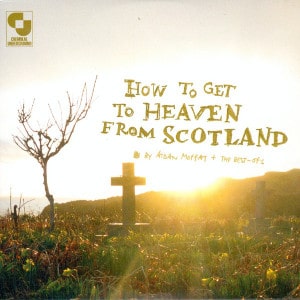 Our friend from Falkirk’s work ethic makes this immersion in his music quite easy. In all that Aidan Moffat has shared with the world, be it music spawned from his partnership with Malcolm Middleton (in the form the popular, brooding outfit Arab Strap) or his latest offering, the noticeably more upbeat release How To Get To Heaven From Scotland (HTGTHFS), Moffat has always embraced a remarkable sense of earnestness. It’s easily his most endearing trait, and one that is most evident when discussing lust and love.

However, while authenticity continues to be elemental in his latest work, the tone of the tunes, in comparison to that of his prior releases, has brightened dramatically.

Perhaps it was the welcoming of his first son into the world, or simply the wisdom that age and maturity impart that has him beaming. Whatever the reason, Moffat’s heart (like the box set, which includes the album, various b-sides, a board game and a signed card) is bursting, and the mood of HTGTHFS’s subject matter follows suit.

In the bouncy track Big Blonde, Moffat spots an old crush (expressed as one of his “heart’s former keepers,” to cleverly uphold the rhyme scheme) to whom, given the updated look, his attraction has waned. Soon after, he quickly dismisses as flippant a slight feeling of embarrassment when recalling his past sentiments in the context of how the woman looks to him now. The story is very relatable, and foreshadows the intimate and familiar means by which Moffat communicates his thoughts.

Instead of wallowing in self-loathing over the matter, as he surely would have done on his previous solo effort I Can Hear Your Heart, he is content to brush off the awkwardness rather nonchalantly.

With pints of Magners held high, and much frivolity in the air, Moffat and a crowd of boisterous back-up singers take part in the raucous Oh Men! The pub sing-along, complete with overflowing pitchers of accordion and guitar under smatterings of shouts and applause, notes that while chaps have wandering eyes and are unparticular “slaves to (their) erections,” their intentions are ultimately honorable and are, in fact, no less base than those of the women they ogle.

Also of note is the affection he expresses for his sweetheart in Living With You Now, whom he, despite enduring frequent and sometimes violent, altercations, has never loved more. Consider also the sweet solace he provides to his soon-to-be newborn son in Lullaby For Unborn Child, a touching ballad whose beat is intriguingly defined by a fetal doppler.

Again, Moffat’s lyrical prowess is on display as he, in spite of his reservations about love and life, about which he has spent much of his career lamenting, effectively shows that he has developed a sense of hope.

HTGTHFS has its problems, though, and they lie with and underneath the singer’s nearly indiscernible, monotone brogue. All too often, overly simplistic melodies meander repetitively as Moffat struggles mightily to stay on key.

This is not to say that the ambience for Moffat’s superb dialogue is completely sterile. The Best-Ofs (comprised of, among others, talent pulled from The Delgados and Mogwai) do well to supply interesting atmospherics and substance to the songs. Musically their contributions, which include a variety of instrumentation and even some beatboxing, are stimulating (at least, enough so that the listener does not wish that Moffat had simply read poems for just under 40 minutes without accompaniment).

It’s appropriate that Aidan Moffat is releasing his latest work as a Valentine’s gift for his listeners. Like roses or chocolates, the sentiment is sweet, but the enjoyment it inspires is fleeting. Our sage’s ubiquitous writings (whether they be blogged, spoken, or sung) are sound. It is the sound, though, of this latest offering that may leave listeners wanting.