by Steven Johnson
published: 11 May 2018 in Album Reviews
Tweet 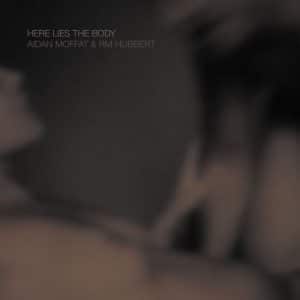 The Glasgow music scene has always had a strong collaborative element to it, and Here Lies The Body by Aidan Moffat and RM Hubbert is the latest album to stand as proof. Both artists have followed not dissimilar career paths since the mid ’90s, with those paths occasionally intersecting, but this is the first full release bearing both of their names.

Collaboration has been a strong presence in the recent careers of both artists. Moffat has released two highly regarded albums with Bill Wells while RM Hubbert’s Telling The Trees album from last year saw him work with 11 artists (one per track) which showed him to be adept at creating delicately picked, complimentary guitar foundations for others to build lyrical stories on. This is now further extended on Here Lies The Body.

Hubbert succinctly and self-knowingly summarised the album’s origins by explaining how he sent Moffat 10 songs about death, only to get 10 songs back from Moffat about sex. As always though there’s more to it than this, something that is revealed early in the album on Mz Locum. It starts off on familiar lyrical ground as Moffat serenades his partner: “She’s a bombshell in leggings, a goddess in jeggings, but she’s best when they’re all on the floor.” But later the song moves in a poignant direction as he bids her goodnight and says he’s “back off to the grind”. It offers more than what’s immediately visible on the surface. These are songs of relationships, of survival, of necessity. Life’s small details remain a fertile ground for Moffat’s lyrics.

The album also shows how Moffat’s vocals have strengthened over the years, now even more buttressed and full-bodied, and how he keeps his cultural references bang up to date. Earlier, the album opened with Moffat singing a duet with Siobhan Wilson on Cockcrow, the tender vocals and unfurled acoustic guitar of Hubbert combining seamlessly. Similar can be said of Quantum Theory Love Song which sees Moffat cleverly reimagine familiar tropes in unusual contexts and alternative worlds.

Wolves Of The Wood and Keening For A Dead Love make up an unsettling centre-ground to the album. The former sees Moffat narrate shortened storylines over Hubbert’s suspenseful backdrop while the latter is macabre yet strangely compelling, Hubbert’s gnarled guitar lines curling around the lyrics. Party On restores balance as Moffat recounts a tale of a couple trying to break out of the tedious confines of daily life: “Let’s fight the dawn and party on, do something shocking.” It also contains a classic Moffat-ism in “this sex machine looks knackered, but it’s just a wee bit rust”. Tribalistic percussion carries the song to its conclusion.

Everything Goes and Fringe offer reflective closing moments, the latter in particular showing how Moffat can expand the everyday and mundane into something grander, encouraging and funny. Yes, Here Lies The Body might contain its fair share of matters of the flesh, but it’s also an album of depth, ideas and ambition that retains a highly personal feel. Moffat and Hubbert prove the collaborative Scottish spirit is in fine condition.