Airbourne – No Guts, No Glory 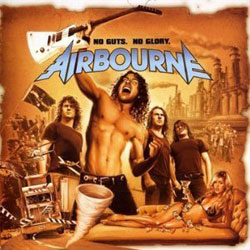 How to be the next AC/DC: Australian? Check. Hard rockers? With loads of hair to bang about. Trite lyrics full of sexual innuendo? Yup. Hypnotizing guitar solos inspired by Angus Young? It’s all there. Siblings in the band? Meet the O’Keefes.

Airbourne, comprised of singer/guitarist Joel O’Keefe and his drummer brother Ryan, alongside bassist Justin Street and rhythm guitarist David Roads, caused a storm of comparisons with AC/DC when they hit the scene with their debut album Runnin’ Wild in 2007. And it seems that their quest is to follow in the classic Aussie band’s footsteps.

No Guts, No Glory, their sophomore album, is an ode to classic Aussie pub rock, where whisky is a go-go and rock ‘n’ roll is furious. Produced by Johnny K, who counts 3 Doors Down and Staind amongst his credits, it is a glorification of straightforward, no-holds-barred rock that you listen to purely for the pleasure of playing some air guitar. Perhaps Motorhead would be a more apt comparison, but structurally it is all 1980s AC/DC. We even expect Joel O’Keefe’s vocals to break into Back In Black at any moment.

Opener Born To Kill sets the tone for the rest of the 13 tracks, all of which are pretty much interchangeable. First single No Way But The Hard Way explains why drinking is sometimes a necessary evil: “You say I drink too much/And that is a problem/But that’s how it goes/When you hit rock bottom.” It’s actually a nostalgic jog down Memory Lane to a time when all they could afford were barbeques and beer. Then with success came the hot rock chick: Blonde, Bad And Beautiful: “She’s a wet drink in a desert.” Booze, particularly whisky (we sense a sponsorship deal coming up soon), comes up a lot, including in Overdrive and Back On The Bottle.

Musically, Airbourne evidently has ’70s and ’80s influences, and No Guts. No Glory almost sounds like something from that era; much of it was recorded on analogue and literally bleeds guitar riffs. Raise The Flag carries Thin Lizzy influences and the old adage “Rock ‘n’ roll will never die”. The message is repeated in It Ain’t Over Till It’s Over. We’re not sure what White Line Fever is referring to. It’s another sing-along, air-guitar-along track anyways. Yes, it all is a bit clich�d, but Airbourne do it with well-devised efficacy and riff skills.

And despite the clear-cut influences, Airbourne sound like they just want to rock and have fun in the process of making music to play live. Like Motorhead, this is a band that should be seen in all its headbangin’, hair raisin’ glory to be fully appreciated.

More on Airbourne
Airbourne – No Guts, No Glory