Airship – Stuck In This Ocean 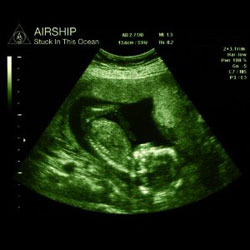 “We’ve heard it all before, Leo. You drive me to political safe ground,” says The West Wing‘s President Bartlet to his Chief of Staff. “It’s not true,” replies Leo. “You drive me there.”

It would be easy to blame the producers (Doves fader-fiddler Dan Austin, also a Doves guitarist and a member of Editors) for the blandly epic tone of Airship’s album Stuck In This Ocean, but the band must surely take some responsibility themselves. At numerous times throughout they display the verve and invention of which they are capable, but more often than not, defeat is admitted and they let themselves be dragged back to the middle of the highway.

There is a soul, a molten core of rock within this band that feels suppressed; a burning oil well capped. The very first riff of the record could only have been written by a musician whose parents are threatening to throw out his back issues of Kerrang! and repaint his bedroom. It smacks of post-breakthrough Biffy Clyro, a poppy post-hardcore rush of blood, and it’s partnered with a chorus to lift hands into the air – but it’s hard to imagine that this was exactly the sound the writer had in his head when he first hit upon those chords. There is a self-proclaimed passage of “non-stop brutal distortion and riffing” in the painfully meaningful The Trial Of Mr Riddle, but if you’re expecting a sound akin to The Melvins and Mogwai jamming together, you’re going to feel more than a little let down.

The first of this album’s few surprises comes with the second track, an indie glam number shuffling its way to nowhere, like Kasabian‘s Fire without the chorus. Despite its shortcomings it does at least briefly raise notions of eclecticism, but for the most part the bland production stifles any latent variety. Only the frenetic shoegaze of Kids, the Arcade Fire-esque Spirit Party and the second album era Foals groove of Test come close to realising their potential. Even then, a swift visit to the Everything Everything College Of Making The Most Out Of Your Flute Hook would have improved the latter track at least fourfold.

“Let the poets write that he had the tools of greatness, but the voices of his better angels was shouted down by his obsessive need to win” is the accusation made to President Bartlett by his idealistic Communications Director. And so it is with Airship. By their own admission they started out as “a weird mix of The Get Up Kids punk and Pavement slacker grunge”, which sounds like a pretty interesting band. What happened to them?

More on Airship
Airship – Stuck In This Ocean