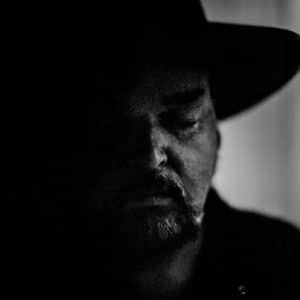 Whilst this is Alain Johannes‘ third solo album, for the majority of his 30 year career he’s been a shadowy figure, lending his talents to the efforts of others, and never really stepping into the limelight. The list of people and bands he’s worked with is, frankly, remarkably impressive and delves way back into the history of alt-rock.

There’s the often overlooked, but hugely influential band Eleven, which featured Johannes’ wife and muse Natasha Shneider and Red Hot Chili Peppers drummer Jack Irons. Johannes and Shneider also contributed to Chris Cornell‘s solo album Euphoria Morning and Queens Of The Stone Age‘s Lullabies To Paralyse. The list of collaborators and bands goes on and on; Mark Lanegan, Arctic Monkeys, Them Crooked Vultures, Dave Grohl, and PJ Harvey have all harnessed Johannes’ musicianship and nous at some point over the years.

Over the last few years, Johannes has not had a particularly easy time of it. He lost his wife Shneider to cancer, and then the passing of Chris Cornell hit him hard too. In late 2019, he was struck down with pneumonia which led to two months in bed in order to recover from his severe illness. It was during this time that the loss of his partner and friend began to weigh heavy on him, and Hum represents a time of reflection and catharsis, but also the will to create in the face of illness and fading memory.

It is surprising then, just how laid back and apparently chilled out much of Hum is. Written over the course of just 12 days, it would not be unsurprising to find these songs to be somewhat rushed, or perhaps shot through with a sense of anger. From the opening two tracks, Mermaid’s Scream and Hum, it’s clear that this is an album of meditative calm and acceptance. Gentle picked guitar and a quietly lilting voice, Johannes is in reflective mood and simply trying to make sense of it all, whilst holding on to the memories that he holds dear. Hum in particular steps away from what might be expected from a seasoned alt-rock hand, exploring quiet and contemplative folk, sounding not unlike Nick Drake at times.

Hallowed Bones continues in the folk vein, throwing in those slightly Eastern flavours that occasionally pepper the work of QOTSA to this tale of loss and loneliness. Someone ramps up the emotion over some fine finger picked guitar as Johannes questions those who’ve left him (presumably) “why won’t you let me go, give me a chance at living” whilst also acknowledging that some things are just beyond the strength of his will.

Things get a little more driven as the album progresses. If Morning Comes channels the more desert fried efforts of Queens and Kyuss, with its squalls of guitar and relentless drumming. Vocally, Johannes isn’t too far away from Josh Homme here, but that’s really incidental. During his rehabilitation, Johannes kept saying to himself that if he could make it through to the morning he would everything he could. If Morning Comes might sound like one of the more angry songs on the album, but it’s a celebration and display of sheer willpower. There’s a tangible sense of strength here. Where there’s strength, there’s also soul, and on the stripped back blues of Sealed is where Johannes is at his most soulful. With the heavy application of reverb on his vocals this is the sound of someone standing on the edge of the void and making the decision to face it head on.

Nine embraces electronic beats (which sound like a fucked clock) and roughed up bass lines. It’s fair to say that the second half of the album is considerably more noisy than the first. “The morning won’t kill me again, but I’ll see you soon” croons Johannes, summing up the feel of the whole album. It’s defiant and celebratory, but also recognises how life is going to pan out. This acceptance means that Hum is the kind of album we need in times of trouble and loss. Its calmness in the face of life’s trials is truly inspiring. That something so thoughtful and positive could come from such a turbulent time is someone’s life is astounding, and showcases just what a great songwriter Alain Johannes is.