by Max Raymond
published: 23 May 2011 in Album Reviews
Tweet 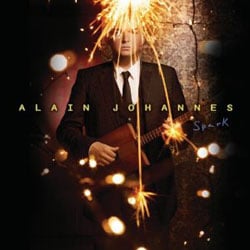 When Natasha Shneider, vocalist and keyboardist of hard rock band Eleven and sometime member of Queens Of The Stone Age, died in July 2008 of cancer it hit those around her hard. Not least Alain Johannes, her widower. Nearly three years on he is releasing his first solo record, Spark, which serves as a tribute to his late wife and acts something like catharsis. It’s almost as if listening to this LP is intruding on his private grief. Thankfully that this turns out not to be the case.

Rather than a long, sprawling, overly emotional set of songs, the results are actually intimate and concise; the overall running time is only about half an hour, meaning that there isn’t a lot of filler to be found. All eight tracks are comprised primarily of guitars and the arrangements are suited to showcase Johannes’ skillful playing, as showcased on the Arabic-flavoured Make God Jealous and Gentle Ghosts, which has a Mediterranean feel.

The lion’s share of tunes are ballads, whether they be contemplative and sparse such as Spider and The Bleeding Whole, or very direct and upfront, both in terms of noise and the lyrics, like on opener Endless Eyes (“It’s killing me that I must go on living”) or the sprightly and catchy Return To Me. The album closes with Unfinished Plan, which seems like a very definite full stop (“I’m not afraid of letting go”) as he comes to terms with his loss.

Vocally, Johannes is a competent singer but he leans a little too close to the vocal stylings of his fellow QOTSA luminaries Josh Homme and Mark Lanegan for comfort. But his musicianship is impressive; each song feels different. The easy option would have been to do a straightforward acoustic guitar album, but instead it’s augmented with all manner of flamenco, featuring mandolins and much else that serve their purpose well.

Spark is refreshingly minimalistic and self-aware. It knows exactly what it has to say and doesn’t add anything unnecessary. It will also no doubt appeal to those who are into Queens Of The Stone Age and Them Crooked Vultures because of Johannes’ associations, but will it strike a chord beyond that? If it doesn’t, it would be fair to assume that he won’t care in the slightest. This is a record he needed to get out of his system regardless and, for what it’s worth, it’s a gutsy statement and a fitting tribute to the memory of his departed wife.