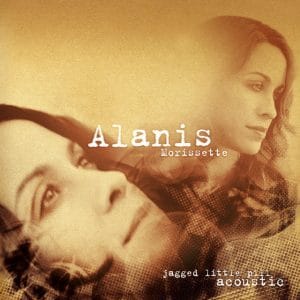 Ten years ago I was a timid nine year old sitting in my room on a Saturday night listening to the local commercial radio station’s rock show that was showcasing a young Canadian lady’s debut album.

That record was Alanis Morissette‘s Jagged Little Pill, and that night something changed in my head, like an awakening behind my innocent eyes – there was more to music than the 40 tracks Dr Fox played on a Sunday afternoon. It wasn’t just me that felt that way. It seemed as though the vast majority of my peers concurred – Jagged Little Pill was a masterpiece. And the record sales backed up that point.

A decade and two largely underwhelming albums later, instead of going back to the drawing board, Jagged Little Pill has been re-hashed. On the face of it releasing this acoustic version seems to be an act of commercial desperation, but there’s a lot more to this album than an exercise in consumer exploitation.

The opening strains of All I Really Want are less angst ridden than the crushing opening chords to the original album. Alanis’s voice is the same, but 10 years of soul searching have mellowed her. The only real sense of anger is in the lines “enough about you, let’s talk about life for a while / The conflicts, the craziness and the sound of pretences / Falling all around”. Or maybe it’s the fact that it’s only in your late teens that there’s more problems in the world than maths homework.

The haunting echoes that accompany the intro to Perfect gives the song a sense of scale as it resonates beyond your speakers – it gets inside your head. It’s emotive, almost reminiscent of Kurt Cobain’s howling in Nirvana‘s Unplugged version of Where Did You Sleep Last Night. The acoustic version of Hand In My Pocket completely changes the entire ambience from the original, there’s a genuine softness to it. It’s almost apathetic; no one has really got it figured out just yet.

Only through listening to the album in a different light can you step back from the way you perceived the original. Almost every word is the same, but it’s only now that I can see the deep religious implications of Forgiven. It’s not something that’s come with me growing up – had I put my copy of the 1995 version on I still wouldn’t have grasped the anger towards the Catholic Church’s ‘rules’ about sexuality that Alanis has now apparently overcome.

And it’s only now that her (albeit small) role in Dogma can be seen in a new light – was it acting, or was it a much needed cathartic exercise? History hasn’t been re-written with this acoustic album, but new light has been shed on it. Although you are likely to be singing along to every word, don’t be too shocked up if you cock up towards the end of Ironic as the lyrics are changed to “It’s meeting the man of my dreams / Then meeting his beautiful husband”. This is 2005 after all.

This acoustic version isn’t as strong as the original – but Jagged Little Pill was revolutionary. It was the musical foundation of my generation, and a decade on aspiring singers will still try to imitate Alanis. It’s apparently the highest form of flattery, because anyone who can pull off any one of the 12 tracks here without causing cringes clearly has talent.

Yes, there is an element of sly marketing at play here, and no, Alanis Morissette hasn’t exactly been the most stable of characters over the last 10 years. But this is about music, and the quality of that cannot be underestimated – even if it is only a re-working of an album that we probably all own already.