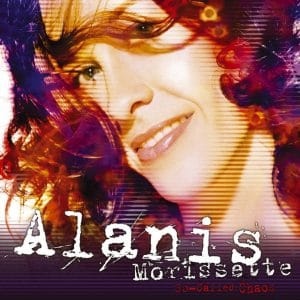 In 1995 a hard-edged Canadian woman released an album called Jagged Little Pill which could claim to have revitalized music for the 1990s. It was aggressive and bitter but exciting, inspirational, introspective and passionate. Since then Alanis Morissette has become the female Kurt Cobain for an entirely new generation of angst ridden, lonely and unsuspecting teenagers; this formula would place Morissette on the grand throne of an international rock goddess.

From that point it has been a bumpy ride; her follow up to Jagged Little Pill – the underrated Supposed Former Infatuation Junkie – explored the same battleground and used the same weapons as in her debut album but paled in comparison to her debut. Her third rant, 2003’s Under Rug Swept, seemed to have fallen through the floorboards. Now we arrive at this point, the release of her fourth studio album and what is more noticeable than anything else is how happy she seems.

Forget the rage and anger, the acid tongue and the grungy, thunderous vocals, Morissette is content with a new man and she wants to explore those feelings; So-Called Chaos is less anguished and more focused but is still full to the brim with her familiar introspective lyrics. It seems that she has banished most of the demons that had once plagued her, but there a few that still lurk in the hidden recesses of her mind which she explores in Eight East Steps (“How to keep smiling when you’re thinking of killing yourself”) and The Grudge (“11 songs four full journals, thoughts of punishment I’ve expended”).

For the most part, Morissette is happy and is equally keen to share her heartfelt emotions in songs like Knees Of My Bees (“We share a culture, same vernacular. Love of physical humor and time spent alone”) and on the title track she wants to be “naked running through the streets”. The joy continues on Everything (“I am the kindest soul with whom you’ve connected”) while on Spineless she explores her relationship with her partner in more general terms. It’s vain and boastful but it makes a meaningful and refreshing change.

It’s fine and dandy that she has cleaned most of the cobwebs from her closet and is more than eager to share her happiness but this does not necessarily make brilliant music. Her previous relationships proved to be a fundamental facet of her aggressive voice – perhaps to forget them would mean losing her muse.

The lyrical content is interesting, but musically she has rarely changed the channel since her first album. So Called Chaos is stuck on the same catchy pop-ish hooks, big booming choruses and the not always remarkable guitars. It feels like she has taken us to this room before and she is avoiding taking us around the rest of the house. It’s certainly her most commercial album to date, but perhaps the problem is that she hit the commercial peak too early in her career and is now trying to climb her way back up after the less than spectacular sales of her last effort.

Alanis Morissette has been accused of making a success out of misery and despair. To a certain extent that is true, but she is now at a point in her life where that no longer matters. So-Called Chaos is packed with hope, courage and happiness which she uses to offer advice to those who want to take it and pass some around. It is an album that is compelling and rarely boring but not always exciting – it just needs to be peppered with a bit more aggression to give it a rougher edge. Perhaps on her next album she should change musical direction as well.