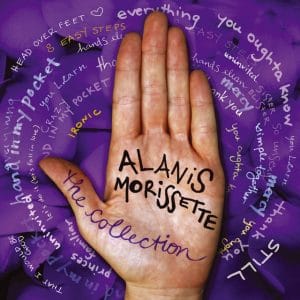 To mark 10 years since the multi-million selling Jagged Little Pill album first turned Alanis Morissette into a global superstar, we now have an 18 track retrospective of Morissette’s career to date. It would be inaccurate to describe it as a ‘greatest hits’ or even a ‘singles collection’ – rather this is some of Morissette’s best known moments together with what’s described on the cover as her own “favourites” – film soundtrack numbers, acoustic versions and so on.

The retrospective gives us a chance to see both the best and the worst sides of Morissette. For every startlingly personal lyric such as the still fresh-sounding You Oughta Know, there’s also the ridiculous amount of psycho-babble which seems to have become the hallmark of her career of late.

While it’s refreshing to hear intelligent lyrics, an hour in Morissette’s company makes one feel like you’ve swallowed a self-help book in one gulp. Tracks such as Thank U, Eight Easy Steps and If I Would Be Good are filled with earnest lyrics such as “how about not equating death with stopping”, “how to defer to men in solveable predicaments” and “that I would be grand if I was not all-knowing”. It’s not helped by Morissette’s voice either which has a tendency to drone on some of the more downbeat tracks here.

The best songs on The Collection are predominately the early ones. You Oughta Know and You Learn have a lightness of touch that nicely balance the darkness of the subject matter. Hand In My Pocket, despite featuring Morissette’s tendency to caterwaul, is pleasingly catchy, and Ironic, despite those much chortled over lyrics, is a great song. No, rain on your wedding day or the man of your dreams being married isn’t particularly ironic, it’s just unlucky – or maybe that’s the whole ironic point of the song? Whatever it all means, it remains one of her finest singles.

Yet the failure of Morissette to follow up Jagged Little Pill hangs heavy over The Collection. Her long awaited follow up, Supposed Former Infatuation Junkie, was not only saddled with one of the worst album titles of all time, but was also far too long and, unlike its predecessor, was lacking in memorable tunes. Compared to the Jagged Little Pill material on here, it’s easy to see why it was considered a massive disappointment on its release.

There’s also material from Morissette’s last two albums, of which Hands Clean is the definite highlight. Delivering an uncomfortably personal tale about apparent child abuse by an older man, she drops the cod-psychology and is instead unblinkingly honest. The fact that the song’s also set to her best melody since You Oughta Know makes it one of the best tracks on here.

The remainder of the record is taken up with some of Morissette’s film material, which swing from hauntingly beautiful (the City Of Angels song Uninvited) to the utterly bizarre (the cover of Cole Porter’s Let’s Do It from the soundtrack of DeLovely, which sounds like a parody of itself). Not to mention the dreadful cover of Seal‘s Crazy, which is given a trite Euro-disco backing here.

The Collection is a handy purchase if you’ve always liked Alanis Morissette’s singles but never bothered investigating her further. Like most acquired tastes though, she’s best in small doses – over the course of a full album she does become somewhat wearying. It’s also noticeable that an album intending to celebrate Morissette’s 10 year long career is memorable mainly for her early singles. Isn’t that ironic? Maybe not, but a bit disappointing for sure.