Alasdair Roberts & Friends – Too Long In This Condition 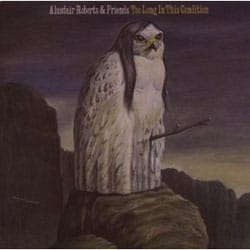 While the Mercury prize committee acknowledges the great health of British folk music by tipping the hat towards the popular but questionable Mumford And Sons, a whole group of inspired forays into musical heritage has built cult status without ever attracting such fervour. The approach of digging deep into tradition in order to find space and freedom is particularly strong in Scotland.

There’s the tumbling, triumphant Trembling Bells but perhaps the key figure in this group is Alasdair Roberts. His previous band, Appendix Out, have still not quite received the recognition they are due for their distinctive fusion of Scottish folk music and gloomy indie. Roberts has since been breathtakingly prolific as a solo artist, alternating between traditional material (The Crook Of My Arm, No Earthly Man) and showcasing his lucid, imaginative original writing (Farewell Sorrow, Spoils).

Too Long In This Condition is not just a return to Scottish folk ballads but also a development of the more fluid, fleshed out arrangements that characterised the outstanding Spoils. The expansion of the credits to include Roberts’ ‘friends’ is by no means misleading, for this is the largest cast of expressive and sympathetic musicians that Roberts has yet assembled. Much has been made of Roberts’ use of scordatura guitar tuning or his painstaking research into the ballad tradition but ‘Too Long In This Condition’ is by no means a dry academic exercise. Musicians such as fiddle player Alastair Caplin and drummer Shane Connolly breathe life and vigour into the material. Vocalist Emily Portman provides warmth and delicacy. Perhaps only the rollicking, highly linear The Two Sisters sounds in any way predictable.

Elsewhere, there are plenty of surprises and musical twists and turns. There’s a wonderfully unexpected moment in The Daemon Lover, when the carefully picked guitar and rumbling drums drop out, leaving just a quietly menacing violin and cello drone. On The Golden Vanity, there’s a wonderful moment when the guitar solo is accompanied by an almost honky tonk piano part. Roberts’ arrangements are far from basic – he often uses drums for their quality of sound as well as for their rhythm. Shane Connolly provides both propulsion and menace on The Burning of Auchindoun, a mysterious and compelling song. Similarly, vocal arrangements are also used thoughtfully, from the brilliant exploitation of the contrast between Roberts and Emily Portman’s voices to the mesmeric full chorus on …Auchindoun.

As has often been the case with Roberts, the material is dark and disturbing, full of tragedies, monstrous crimes and stories of loss. Sometimes these are set to appropriately haunting melodies, such as The Lover’s Ghost but, more often than not, the rhythms are lively and the tunes bright. The Golden Vanity tells the story of the sinking of a ship to a musical accompaniment that is positively jaunty. The horrifying child murder at the heart of Little Sir Hugh is considerably more violent than the arrangement suggests. Roberts has a way of lulling the listener into a false sense of security that is original and impressive. The album ends with perhaps its least transparent, most sophisticated pieces. Barbara Allen, particularly, is a dense narrative that demands several listens to reveal its nuances.

Roberts has become such a superb storyteller that it no longer matters whether the material is traditional or his own. He has absorbed this music and its power and he completely inhabits these songs. His phrasing has never sounded as precise and articulate as it does on Young Emily. He seems to delight in delivering these vivid, often frightening tales.