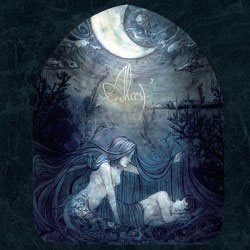 Black metal carries a lot of baggage. Mention it to most people and they’ll probably think of burning churches, corpse painting, and possibly the rubber-nosed Mortiis. It is fair to say that outside of black metal circles, it’s a genre that’s ignored, misunderstood, and plagued with misconceptions.

That the man behind Alcest – Neige – has his roots in Black Metal might go some way to explaining why the band’s 2007 album Souvenirs D’un Autre Monde failed to make a larger impact. Despite Neige’s background, Souvenirs came from a different place entirely. Songs that drew on post-rock, shoegaze and folk music created a stunning album with considerable emotional depth. Those that heard it were in little doubt it was one of the best albums of 2007, if not the decade.

Écailles De Lune finds Neige in the awkward position of having to live up to a previous work held in high regard by those in the know. A concept album inspired by the ocean, it tells the story of a man who switches between states of existence. It’s fair to say that the album comes laden with its fair share of pretensions.

The opening pairing of Écailles De Lune Parts One and Two find Alcest in familiar territory. The delay drenched guitars and lilting vocals call to mind My Bloody Valentine and Sigur Rós as the soundscapes develop into gentle lapping waves that induce an almost hypnotic state. However, when the drums begin to thunder and the guitars ratchet up the distortion, Neige lets rip with a tortured howl that alludes to his black metal leanings.

Percóes De Lumière is the last real metal flourish on the album, with Neige’s screams leading the way over a typically swoonsome chord progression. The onslaught is short lived however, as the song gradually eases into prog territory with soaring guitars leaping to the fray and angelic vocals adding a choir-like quality. Although Neige has allowed black metal to inform Alcest’s sound once more, it is in a somewhat diluted form and never becomes overbearing.

Écailles De Lune is very much an album of two halves. While the first three songs possess the most bombastic edge, what follows is lighter and otherworldly. The moody sound effects of Abysses act as a brief welcoming committee, while Solar Song finds the band at their most laid back. With the screaming vocals banished completely, Alcest evoke the most delicate moments of My Bloody Valentine, and add a vocal line that is as brittle as it is narcoleptic.

Sur L’Océan Couleur De Fer closes the album in tranquil style. Neige’s vocals are filled with a longing that causes the hair on the back of the neck to bristle and waver. A vast panorama that takes its lead from folk, the guitars chime as they dance around Neige like playful fairies. There are elements of Radiohead‘s Street Spirit and Sigur Rós’ epic ballads beneath the surface, but Sur L’Océan Couleur De Fer is anything but derivative and showcases Neige’s versatility as a songwriter.

Écailles De Lune is a wonderfully realised album, perhaps not quite as strong as its predecessor, but it has depth and an abundance of magical moments. With luck, any black metal baggage will be ignored and Alcest will find the wider audience they deserve.