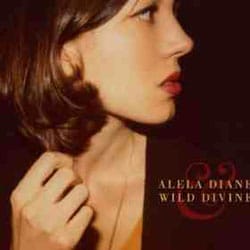 Hailing from Nevada City, Alela Diane played many of her early gigs with fellow native singer-songwriter Joanna Newsom but it’s a shame she continues to spend time in Newsom’s shadow.

In spite of the huge acclaim she received for her debut The Pirate’s Gospel (which topped the Rough Trade Shops albums of the year poll) and its equally excellent follow-up To Be Still, she doesn’t quite seem to have entered the popular imagination in the way that Newsom undoubtedly has. Diane has her own approach to songwriting of course. Whilst her songs are not quite as epic and allusive as Newsom’s, they are no less poetic or evocative. Her voice is characterful but less imposing and quirky and her music more grounded in tradition.

Alela Diane & Wild Divine is her first recording with a full, credited backing band and, at least in places, is comfortably the most conventional recording she has made so far. To Be Still had already started an expansion in her sound and had something of an ensemble feel, so this seems a natural further development of that process. Yet it is striking and ironic that the most successful songs here are the most skeletally arranged.

The Wind, particularly, is something of a triumph – gentle, yet somehow also dark and dangerous (its key lyric is ‘death is a hard act to follow’). A great contributor to the song’s ambiguous and hypnotic mood is the presence of slide guitar. The dense narrative of For Elijah, set against a rustling acoustic guitar strum and banjo pluck, is similarly immersive, although it shares a number of melodic and harmonic traits with another great American songwriter, Neko Case. The lyrics on both these songs are characteristically enigmatic – perhaps even obtuse – but they also have a compelling magnetism and emotional richness.

Songs like the opening To Begin, with their Wurlitzer textures and soulful backbeat seem to be in the country soul writing tradition pioneered by artists such as Dan Penn or Tony Joe White. Whilst they are handled adroitly enough, there is still a lingering sensation that some of Diane’s idiosyncrasies have been slightly diluted. Similarly, the Neil Young-esque plod of Long Way Down is well executed but surprisingly unadventurous. Scott Litt, an immediately identifiable name for his work with R.E.M., is a reliable, assured choice of producer, and the whole album is bathed in a warm, ingratiating sound.

Clearly there’s nothing wrong with the basic principle of Diane fleshing out her sound and utilising the skills of a wider range of musicians. Yet some of the arrangements here have the effect of smoothing out her distinctive songwriting style. When the playing is at its least intrusive, as on Suzanne and Of Many Colours, it works reasonably well, but even then, Diane and Wild Divine are dealing in longstanding, established conventions. Alela Diane & Wild Divine is a little reminiscent of last year’s highly feted debut from Dylan LeBlanc – but there’s little doubt that Diane is a braver, more interesting songwriter. Wild Divine finds Diane attempting new approaches to production and arrangement and should perhaps be seen as a transitional album. At the moment, the performances from within her comfort zone remain the most effective.