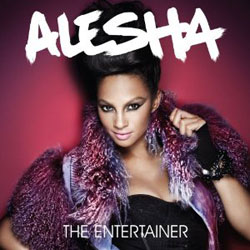 Alesha Dixon has become the darling of Saturday evening light entertainment since her victory on Strictly Come Dancing in 2007 and her return to the show as the easy on the eye celebrity judge. After starting her career as the ‘talented one’ of the urban girl group Mis-Teeq, Britain’s less successful answer to Destony’s Child, Ms Dixon has cemented herself as a favourite amongst the middle England viewers of BBC1’s flagship show.

So it is somewhat surprising, but refreshing, that Alesha has eschewed the temptation to produce a Tesco friendly album of syrupy ballads for mums this Christmas. Quite the contrary; recruiting the help of some big names in British grime and R&B, plus the expertise of some prolific producers such as Toby Gad (Beyonc� and Fergie) and Kuk Harrell (Beyonc� and Jamie Foxx) The Entertainer is an album of diverse dance floor tracks that emulates some of pop’s recent omnipresent female chart toppers such as Rhianna, Cheryl Cole and Lady GaGa.

It opens with Baddest Chick, ostensibly as a reminder of the urban roots to her music and as a ruse to limit the references to her status as the friendly face of judgement on Strictly.

Stand out track Radio has clear echoes of Robyn)’s excellent Dancing On My Own, with punchy drum beats, electro strands and vulnerable lyrics. Sadly, a dub inspired remix of Radio with traces of Major Lazer‘s Pon De Floor and featuring the grandfather of grime, Wiley, finds itself relegated to track 12 where it should surely have demanded greater pride of place.

Versatile UK R&B heavyweight Jay Sean weights in on Every Little Part Of Me which will inevitably be a dancefloor favourite – the chorus destined to be murdered by groups of festively merry party goers.

Title track The Entertainer is mild respite from the two preceding weak links and sees Alesha return to more melodic electropop rather than the beat heavy disappointments. But The Entertainer never reaches the earlier highs of Radio and Every Part Of Me. It trails off with largely forgettable tracks such as Tug O War and On Top. La La La is the only compelling reason to persevere to the end, borrowing as it does the sound of the curiously popular N-Dubz.

There is no doubt that Alesha is a talented artist, and has clearly benefited from accomplished production. But The Entertainer fails to satisfy as a coherent album, perhaps reflecting that people likely to buy this will not do so in the aisles of Morrisons whilst doing the Christmas big shop, but will rather download a single on their phone after seeing it performed on T4.

Alesha should be commended for her artistic credibility, sticking with the sound that has made her one of the UK’s favourite R&B pop singers and not trotting out a bland record. But, although singles Radio and Every Part Of Me should feature strongly in the download charts, The Entertainer is no match for Gaga’s pop, Rhianna‘s R&B, Robyn’s electro or Kelis‘s production.