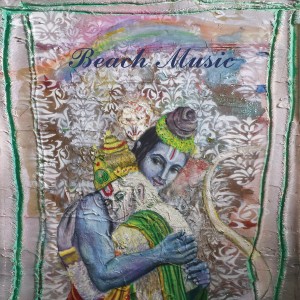 After the release of DSU on Lucky Number last year, Alex Giannascoli (to use his full name) suddenly became something of a lo-fi hero. DSU wasn’t his debut though, far from it, he’d been churning out albums on his Bandcamp page and steadily accumulating fans that couldn’t get enough of his lo-fi pop gems.

Beach Music is his seventh album, and his first for a label of Domino’s stature, but anyone concerned that the charm of his earlier work might be lost in the transition needn’t worry; Alex G’s wonky genius remains practically unchanged. It may be a little tighter in construction and slightly buffed around the edges – thanks to the mixing and mastering of Jake Portrait from Unknown Mortal Orchestra – but things that made Alex G’s previous work so emotive remain.

The authentic sounds of fingers on guitar strings is present, as are the pitch shifted vocals that define many of his recordings. Those strangely intimate moments that sound as if they’re being whispered into the microphone in a darkened bedroom still cause the hairs on the back of the next to rise, and the live feel that makes his songs crackle with a thrilling energy all remain. Most importantly, Beach Music never really settles into a groove with each of these songs sounding as if they’ve come from a different place musically and emotionally; although it is fair to say that Beach Music is perhaps a more melancholic beast to its predecessor.

The introduction to the album however serves as something of a knowing joke, as overdriven guitars and Prodigy style beats serve as a welcoming, and an idea that things might be different even though it sounds like a rave in the bottom of a rusty bucket. Once the gentle strum and pitch-shifted vocals of Bug ease in, it’s clear everything is as it should be. It’s a wonderfully hazy opening, with sparse but effective melodies scattered liberally throughout. Even when a fevered stabbing guitar note enters the fray like a lagered up wasp at a picnic, it is soon engulfed in the dreamy guitars and languid croons. Even the chipmunk-like vocals don’t come across as comedic, but possess a strangely frail and delicate edge.

Much of Alex G’s material has been compared to Pavement, in that it has strange discordant quality imbued with a keen sense of melody. The first real example of this occurs on Kicker, a song that most certainly tips its hat at Spiral Stairs and Stephen Malkmus, whilst throwing a little Elliot Smith into the mix. Whilst the Pavement comparisons hold water, the strength of Beach Music is the sheer diversity that stretches across these songs.

In Love is perhaps the most interesting. An emotional rumination on love, it’s the sound of heartbreak and late night drowning of sorrows in a jazz club, transferred to Giannascoli’s bedroom. The mournful piano lightly brushed snare and trumpet provide a classic backing for this tale of love and confusion. Walk subtly hints at The Smiths‘ Some Girls Are Bigger Than Others, whilst Brite Boy’s quirky tale of love and rejections borrows from The Beatles and The Beach Boys.

The pitch shifted conversations of Ready (and the woozy rambling of Station) meanwhile have more than a little bit of Ween’s off-kilter approach about them. Station is a particularly strange creation, with Giannascoli’s high register vocal being engulfed by a swirling and confused voice that appears to try and mask the emotions at the heart of the song by using bravado – “I’ve got lovers and I’ve got friends” – before avoiding confrontation – “please don’t look me in the eye, if you do I think I might cry” – with the song finally resolving on a cute, almost childish keyboard line. This song sums up the turmoil that seems to be in many of these songs, namely that they seek to lay bare the emotions of their creator, but also obscure those emotions by changing the characteristics of his voice, or wrapping raw emotion in sweet melodies.

Even when things get a bit weird, such as on Mud, where Giannascoli seems to revel in a position of power through withheld knowledge, his songwriting craft still manages to sound utterly beautiful. “I know something you don’t know… I know why you’re on the phone… I know I have seen your blood,” he whispers like the world’s most laid back stalker. Yet as creepy as the content may be, it’s still rather wonderful. Long term fans of Alex G have been able to revel in the fact that they knew something that all but a select few knew. Beach Music will almost certainly push Alex G into the wider consciousness, and rightly so.