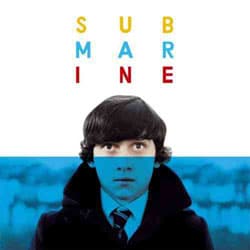 Chances are that if you’re a hardened record collector you’ll have at least a couple of soundtrack albums propping up your collection. However, in the post-Tarantino era of film, soundtracks seem to have become little more than compilations of ironic pop songs, forgotten by history only to be resurrected so Uma Thurman has something to kill ninjas to. Other than Karen O‘s beguiling contribution to Spike Jonze’s Where The Wild Things Are, there’s been little heard from the “Songs from and inspired by” sub-genre; something which represents for many a more perfect marriage of the different mediums.

Arctic Monkeys lynchpin Alex Turner’s EP for the movie Submarine is, according to initial whisperings, in the same class as Cat Stevens‘ near-perfect songs for Harold And Maude, and even the soundtrack holy grail that is Simon And Garfunkel‘s contribution to The Graduate. Time will tell if this is indeed true, but at the very least, this 20-minute collection represents some of Turner’s best work for a long time.

Based on the cult bestseller by Joe Dunthorne and directed by deadpan comedy genius Richard Ayoade, Submarine is another entry into the awkward adolescence genre. Needless to say that this is a rich seam of material that has been heavily mined by songwriters, but there is always something undeniably potent in the wistful melancholy of looking back and recapturing teenage feelings. Turner’s still a spring chicken by most standards, but there is a surprisingly mature tone to these tracks as well as some trademark ironic wit.

The film itself is deliberately timeless and this longevity and universality is conveyed in the music. Few have forgotten the Arctic Monkeys’ Mercury Prize speech: “Richard Hawley‘s been robbed!” but here fellow Sheffield legend Hawley is clearly an influence, alongside a flourishing of the Scott Walker-isms glimpsed at with The Last Shadow Puppets.

Turner’s understanding of the cinematic medium is evident and the emphasis of the EP is on atmosphere; most of these tracks are not as melodic as his previous work. You’ll find little to hum along to but plenty to enjoy and reward multiple visits. This is the sort of collection that echoes around in your head as hauntingly as in a Dolby-fied cinema auditorium.

After an understated beginning there’s a late shift in gear with Stuck On The Puzzle, the EP’s strongest track. In comparison to the effective simplicity of the earlier tracks the song has a more cinematic and poppy feel and the whole thing moves deftly away from a Hawley homage into something more distinct that will probably see everyone humming it on the way out of the multiplex.

Fans are gagging in anticipation of the recently announced Arctic Monkeys album, but on the strength of this EP a full solo album from Alex Turner would be something to really drool over. Submarine is the sound of the real Turner emerging to the surface, and it offers a depth charge to the age of the lazy movie soundtrack.