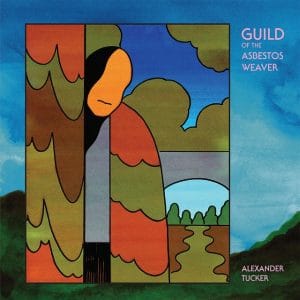 Guild Of The Asbestos Weaver arrives in between Alexander Tucker’s last solo album – 2018’s Don’t Look Away – and Grumbling Fur’s collaboration with Astral Social Club, Time Machine Orchestra from earlier this year, the latest in a series of such collaborations Tucker’s partnership with Dan O’Sullivan have delved into.

Tucker has a love of art, comics and literature and all have provided influence on the new collection. Melding these interests into one, Tucker creates his own worlds and works within them to basically craft his own science fiction, another of his external loves, where authors such as David Lynch and Ray Bradbury feature in his bookcase. In fact, Bradbury provides a couple of up front infuences here, with the album title coming from within his Fahrenheit 451 novel, as well as providing the title of the album’s third track Montag, a character from the same book.

Montag isn’t a typical Tucker song, being one drenched in cello as well as the more electronic presence he has embraced more closely since his Grumbling Fur work began, and it’s eerie as hell. It was actually Bobby Krlic of The Haxan Cloak that provided the soundtrack for recent horror flick Midsommar, but Montag could easily be drawn from it; the strings create a moment to make your skin crawl with their emotion as Tucker sings in his easily recognisable, early Dave Gahan like vocal style and sound, about being in the “autumn of your life” and that “you wouldn’t want to be on top of it when it opens up its mouth”, the lyrics providing typically difficult to decipher stories. For those that saw the film, this is a shuddering reminder of the bizarre unpleasantness within.

Earth and Australian artist Oren Ambrachi are sonic influences prevalent here as both had albums that enjoyed a lot of playing time in Tucker’s home, but the new album bears a striking resemblance to some of Grumbling Fur’s recent catalogue in places. Opener Energy Alphas is a prime example, where a fuzzy, electronic core provides a backdrop for a decent melody, although after seven minutes things become a little jarring. And that is what will either make or break Guild Of The Asbestos Weaver.

At over nine minutes, Artificial Origin provides a highlight amongst the five tracks here, and despite its length, this time it doesn’t outstay its welcome. Moving from experimental beginnings, the track moves along until a driving beat, almost aboriginal, is struck up. Chaotic noise then bombard the ears before it settles back down, with vocals taking less of a front row placement and lyrics this time are compelling, possibly even questioning time and its linear structure as Tucker sings, “sowing the seeds of time, in straight lines, but you’re only seeing lullabies”.

Another tribal canvas is cast for Precog where vocal melodies appeal at first, but, mainly due to Tucker’s love of repetition, they begin to grate after too much exposure over another seven minute song. An even greater patience tester is closer Cryonic; this time you have over ten minutes to wade through, and although you will hopefully pick up on new things every time you give it another listen, whether or not you make it past two or three will be debatable as it really pushes the limits of your listening capabilities with its repetitive titular chanting.

Being Tucker’s eighth studio album, Guild Of The Asbestos Weaver will probably have an already defined audience. There’s no doubting his talents – he played every instrument on the album whilst recording at Hackney’s Holy Mountain – but, much like his sci-fi influences, this album is an acquired taste that may struggle to win a larger audience. If you’re a Grumbling Fur fan, though, you might just like this effort more than any of his other solo collections.