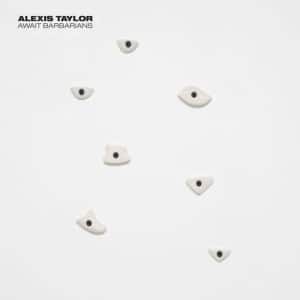 Hot Chip have always been as revered for their more languid, reflective qualities as they have been for their dancefloor anthems. For every Over & Over or Night And Day, there’s a Look After Me or Look At Where We Are. While it may be simplistic to deem Joe Goddard responsible for ‘bangers’ and Alexis Taylor responsible for ‘ballads’, their respective solo careers would seem to lend this theory some weight.

For, while Goddard can effortlessly knock off a disco classic like the brilliant Gabriel or turn his hand to party anthems with The 2 Bears, Taylor seems far more at home contemplating his more wistful side. His first solo album Rubbed Out was a collection of tender folky ballads, and Await Barbarians is an appropriate sequel. There’s certainly not a beat to be found on this mostly acoustic, vaguely ambient collection.

There’s a frailness to Taylor’s voice that suits this material down to the ground. With many of the songs seemingly preoccupied with aging and mortality, the sound of Taylor delicately sighing that “The older I get the closer I feel to the elderly” sounds touchingly poignant. While the sparse arrangements and slightly depressing air probably won’t be to everyone’s taste (especially for anyone looking for more of Hot Chip’s dark funk), there’s a strange kind of beauty on display that works itself into your heart.

The woozy, slightly other-worldly, piano instrumental Lazy Bones opens the album, and it sets the tone for what’s to come – introspective and dreamy, even if it does seem rather half-sketched. That’s an accusation that could be levelled at a fair few tracks on the record – the sparse arrangements and Taylor’s frail voice means that there’s not much meat on these bones.

Yet then Without A Crutch comes along. A beautifully folksy ballad, it’s by far the most accessible song on the album: a gorgeous mediation on a dissolving relationship which adds banjo and harmonica to create a deceptively sunny sound. It’s so good, in fact, that you don’t mind too much when it reappears at the end of the album in a slightly more minimal version. Taylor’s at his best when he’s being nakedly personal as on Without A Crutch – the similarly soul-baring I Am Not A Solider is stunning, with more lyrics ruminating on age, the passing of time and the question of a legacy, which is impossible not to see as a letter to Goddard, especially with lyrics like “When did we last make song, when will I next hear you sing along. You are so close that I could cry, I’ve not heard your voice in such a long time”. Fans of accuracy will also be pleased to hear that Alexis does indeed mean ‘defender’, as the chorus of the song states.

Spacey synths introduce Closer To The Elderly (co-written with Goddard), another song which looks at the passing of time while throwing in references to breastfeeding and developing a bad back – possibly not typical subjects you’d expect to hear about in modern pop, which of course adds to its charms. The piano-heavy Elvis Has Left The Building is similarly intriguing, dolefully listing pop culture icons like Elvis Presley, Whitney Houston, Prince and Bob Dylan and then somehow linking them to religious icons such as Jesus Christ. It takes a few listens to wrap your head around, but it’s one track that certainly benefits from repeated plays.

Sometimes, it’s all a bit too sparse and spare, with Immune System and New Hours being almost tortuously slow and languid. Taylor is extremely good at thoughtful, reflective ballads, but over the course of a full album it becomes almost narcotic. Obviously he’s decided that this isn’t the place for any upbeat material, but that means you have to be in a particular frame of mind when you listen to Await Barbarians. It may not be an album you’ll come back to again and again, but it shows off a refreshingly different side to Alexis Taylor.