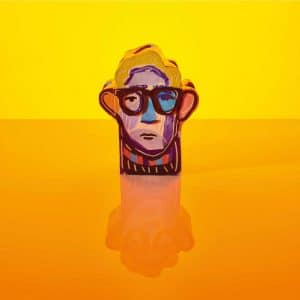 As its members continue to pursue other projects of their own, the possibility that Hot Chip is in fact less than the sum of its parts becomes increasingly convincing. Joe Goddard has embraced the sweatier side of their sound as half of The 2 Bears, and as New Build, Al Doyle and Felix Martin have produced more ambient comedown music. Meanwhile Alexis Taylor has explored the jazzier, improvisational side of things with About Group and played something closer to a singer-songwriter part with his solo work.

None of this discredits Hot Chip, but as Taylor releases a fifth album with his own name on the sleeve his solo work starts to look much less like a side project. Beautiful Thing might be a solo record but it is the first of Taylor’s that isn’t self-produced: he’s called up Tim Goldsworthy of DFA and UNKLE to take on that role. Between them, they’ve put together a collection of songs that muse on music, love and creativity, and which harness the spirit of rave’s collective energy within a more muted, introspective shell.

Opening track Dreaming Another Life sets a distinctive mood with low-key spaciousness but a subtly assertive bass. As the track progresses, elements of jazz and electronica join the sound. There’s plenty going on, but each component is lined up so as not to be crowded out by anything else. It’s followed by the title track, which sounds like deep house heard from just outside the backdoor of the club. We’re in dance music territory here, but we might be thinking about going home.

Roll On Blank Tapes is an odd, waltzing piece, in which Taylor intones lines that belie his production values: “Drum machine have got no soul”; “Home taping is killing music”. A Hit Song could easily be from his 2016 album Piano, a stripped down collection that consists of nothing more than him sitting at the keyboard and singing. This track riffs around the songwriting process and seems to say that imperfection is nothing to worry about. “Needles don’t always meet their groove,” Taylor sings.

Closing track Out Of Time simmers in a heady atmosphere built on the contrast between gentle piano and whirling guitar feedback, but it’s Oh Baby that’s the real curveball here. Amongst all of the ambient textures and restrained piano chords this is a classic, up-tempo love song. It shouldn’t necessarily work here, but it does. That’s because throughout Beautiful Thing the lyrics are about not only music but also the connections and feelings that can bring people together in a single night. It’s in these characteristics that the album’s hidden rave vibe comes about.

As with club music there’s also a good deal of repetition. There’s Nothing To Hide has only two repeated lines: “There’s nothing to hide in a song / There’s nothing to know outside this song.” This track continues the ruminations about the mechanics of songwriting that Taylor began with Roll On Blank Tapes and A Hit Song, but distils the thought process down to its essence. A really successful song is enveloping, comforting and allows you to forget about everything outside of the music. That’s the case with both up-tempo dance tracks and intimate pieces like this one.

There’s surely more to these lyrics than just thoughts on composition: they could represent many things. But if music is a metaphor here then it’s an appropriate one, since music is so bound up with emotions and the way in which people relate to one another. Beautiful Thing works so well because it reminds us of that fact without losing its own emotional resonance.