Algiers – The Underside Of Power 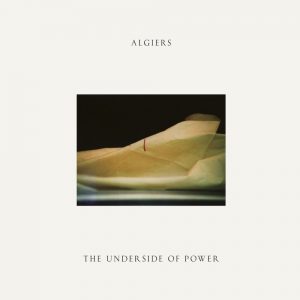 As Her Majesty’s Passport Office will attest, it’s amazing what an appropriate backdrop will do for you. Algiers’ second album emerges baring its teeth at a world as far from an even keel as it’s been in recent times. Something that makes the impassioned, emboldened, enraged stand it takes feels particularly relevant.

It’s tempting to speculate that one followed the other, that The Underside To Power is a direct response to the current political and social climate. Tempting, and wrong. The themes which Algiers focus on – oppression, injustice, the many resisting the few – are broader then the specific manifestations haunting the headlines today. Not to mention the fact they’re the themes that ran through their debut as well.

While recent events may have ‘lucked’ it in to a more prescient position than would have otherwise been expected, there’s nothing lucky about the astonishing way this album sounds. A cacophony of influences from all over – the primitive electronic pulse of Suicide, the firebrand punk strut of the MC5, the soul of Motown, they’re all somewhere in the mix – blended deftly to produce some awesome results.

Initially The Cry Of The Martyrs pulses and throbs like a Dario Argento soundtrack. Then discordant guitars slash in and new (at least on record) member and former Bloc Party drummer Matt Tong propels things urgently onwards.

The jazzy winding runs of The Cycle/The Spiral: Time To Go Down Slowly puts Nina Simone’s Sinnerman to mind. Lead single and title track The Underside Of Power is soulful, but savagely biting and comes complete with a hip-shaking swing to its chorus.

At these moments they make fighting back seem all kinds of funky. There’s a big slice of gospel running throughout too, hymns for a church congregation peering over the edge of the apocalypse and refusing to go quietly.

The songs also showcase the band’s ability to write a lyric which immediately pushes you towards association with whichever current villain is most villainous to you, yet still be oblique enough for a second hearing to leave you doubtful that’s what was meant.

And they have a hell of a vocalist. Franklin James Fisher’s voice is reminiscent of Mick Collins, legend of the Detroit garage-rock scene, lead singer of The Gories and The Dirtbombs. It carries the emotion of the songs, from the anguished guttural cry that follows the sample of murdered Black Panther Fred Hampton that opens Walk Like A Panther, or the caustic ranting of Animals. But he’s equally comfortable on the more elegiac moments, imbuing a poignancy and a poise to the likes of Mme Rieux.

The Underside Of Power is righteous, vicious and vital. If the world is a stage, then at the moment it’s hard to think of a better house band than Algiers.