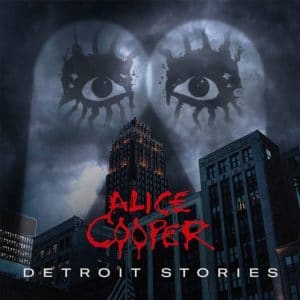 According to some of the hoary tales told in Steve Miller’s 2013 novel Detroit Rock City, the titular northwestern city famed for its endless succession of automotive lines and being the birthplace of Tamla Motown (Mo-tor Town) was somewhat of a war zone when the band Alice Cooper formed, but the majority of bands, despite some occasional shit talking of how the MC5 shoulda made it big instead of Grand Funk Railroad or how The Rationals‘ rootsy garage cover of Respect was maybe better than Aretha Franklin’s soulful version that followed a few weeks after, bonded over their love of playing live and loud to rapturous often whacked out kids and weirdoes.

Half a century later and it seems the majority of those friendships have remained intact, as this record features cameos from Mitch Ryder & The Detroit Wheels‘ Johnny Badanjek, MC5’s Wayne Kramer, Grand Funk’s Mark Farner, as well as members of Sister Sledge, U2’s Larry Mullen Jr for some reason, and Cooper’s wife Sheryl and daughter Calico on backing vocals. The ferocious Social Debris and I Hate You both feature original Alice Cooper band drummer Neal Smith and bassist Dennis Dunaway. It’s literally as Sly Stone once remarked, a family affair. Oddly enough Iggy Pop did a cracking version of that song in the ’80s with The Sex Pistols‘ Steve Jones on guitar, which you can hear on his Nuggets compilation, but Mr Osterberg is seemingly the only former Ann Arbor resident who doesn’t appear to be present on the record.

Rather confusingly, seeing as though they’re supposed to be Detroit Stories, it opens with a cover of a track by a New York band, namely the Velvet Underground’s Rock & Roll. Cooper AKA Vincent Furnier’s snarlingly monstrous vocals still appear supernaturally crisp, strong and loud, whilst long time producer Bob Ezrin absolutely kills it on the cowbell. Thankfully they do manage to recalibrate geographically with their bluesy cover of MC5’s Sister Anne. Don’t Give Up features Cooper’s spoken word verse, similar to Nada Surf’s snarky Popular, offering advice to folk “on the razors edge” on how to survive, a lesson he’s learnt over the years. On Detroit Rock City 2021, the band name checks everyone from Suzi Quatro to right wing gun nut and former psychedelic outlaw Ted Nugent. If you haven’t seen the recent Quatro rockumentary, you really should check it out for the footage of her early band The Pleasure Seekers alone. Cooper appears in the film, being a key figure in her musical development.

Possibly the weirdest and by extension greatest track on the record is I Hate You, in which the various musicians playing confess which of their band mates’ annoying attributes pisses them off the most. Part group therapy, part affectionate ribbing, its honesty and wit is oddly disarming. Not content with raking over the mistakes of their past, Cooper acknowledges the impact felt by the city’s newer bad boys elsewhere. Jazzanova’s Paul Randolph’s funky bass rhythms strengthen the majority of tracks and Go Man Go includes a cheeky reference to local disco punksters Electric Six, with whom The White Stripes’ Jack White famously worked.

As Dunaway remarked in Miller’s tome, talking about the good ol’ days: “There was a hospital for the criminally insane across the road from us. You could throw a rock and hit it practically. On a decent day we’d open up these big gigantic doors to the barn we practiced in, which was part of the deal we got for the house. They didn’t clap at everything. But when we played something that we really nailed, you’d hear them at the prison farm cheering.” With this fun and obnoxiously reverent album, they should get the inmates rioting.