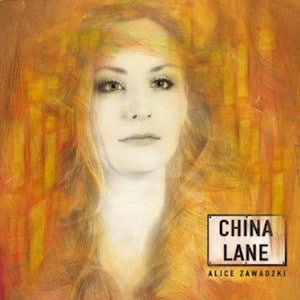 With excellent albums from Emilia Martensson and Chaos Orchestra (featuring the talents of Lauren Kinsella), 2014 has already been a triumphant year for female jazz vocalists. China Lane, the debut album from singer-songwriter and violinist Alice Zawadzki, may just be the most exciting of a rich crop. Zawadzki is a distinctive and individual presence, both as a singer and as a writer, and her own diverse background and immersion in different cultures makes for a compelling and entrancing listen.

Zawadzki has assembled something of a musical dream team here, with the always excellent Kit Downes on Hammond Organ, Jon Scott (Kairos 4tet, Monocled Man) on drums, Andreas Lang on bass and one of London contemporary music’s most innovative and impressive talents Alex Roth on guitar. The result is an outstanding ensemble that plays with feeling and empathy, both supporting and enhancing Zawadski’s unusual songs with richly imagined sound worlds and a wide range of textures.

Scott’s broad cymbal rolls and rumbling strings create a foreboding atmosphere over which Roth’s guitar glistens and glides on the delightful arrangement of Sephardic folk song Dicho Mi Habian Dicho. By way of contrast, the extraordinary Cat (according to Zawadzki herself, this is a ‘modern fairytale’ in which ‘the ghost of a murdered feline finds its way into the body of a woman with excellent consequences’) rather resembles an acoustic Portishead. Its slow and insistent groove suggests something exquisitely strange, and it eventually bursts into glorious colour with some soulful vocal harmonies. The album’s other journey into the Sephardic tradition comes with Indome Para Marsilia, which has a propulsive and celebratory energy.

Coupled with this album’s breadth of vision and exploratory ambition is Zawadzki’s intuitive gift for melody and clear communication. Her voice is an expressive instrument, but she is also a musician aware of the power of restraint and understatement. The wordless Low Sun; Lovely Pink Light, inspired by a visit to a Danish island, is a shimmering delight, with a warm, touching central melody that is later beautifully developed in Roth’s Bill Frisell-esque guitar solo. The opening Ring Of Fire (not an improvisation on the Johnny Cash classic) is playful, perhaps even angry at times – its mischievous melody twisted and stretched in different directions. Zawadzki accompanies the central melody herself with some crisp, darting pizzicato violin.

If there is a standout track here, it is probably Zawadzki’s intense original composition You As A Man, in which she completely inhabits the world painted by her vivid, stark lyrics. This is powerful psychological storytelling – accompanied by similarly honest music. After a vulnerable introduction with Zawadzki’s voice left bare against Kit Downes’ haunting organ chords, the piece bursts into a circling groove that feels as obsessive and inescapable as the song’s words.

China Lane will inevitably be marketed as a jazz album, but the mindset here is so far away from being niche or alienating. Whilst musicians will find plenty of subtleties and nuances to explore, including some fluid improvising and graceful ensemble playing, there is also plenty here for those who might enjoy Björk, Kate Bush, Tori Amos or Joanna Newsom. Unusually for a contemporary jazz album, this music was written and recorded over a long period (five years), and it is characterised by a high degree of thought and care. This is inclusive music that deserves to be heard.