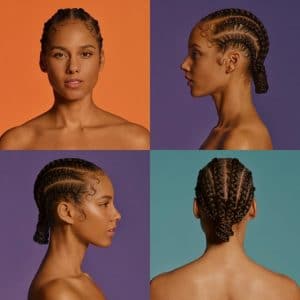 Alicia Keys was introduced to us some 19 years ago with her slick slice of new soul Fallin’. The 19-year-old classically trained pianist wowed critics with her surprisingly layered first album Songs In A Minor which went on to sell over 16 million copies worldwide. Her follow up The Diary Of Alicia Keys was equally captivating, launched with the freshly retro feel of lead single You Don’t Know My Name, and won four of her 15 Grammys. There have since been four more albums, acclaimed film roles (Smokin’ Aces, The Secret Life Of Bees) and a Bond Theme, not to mention the behemoth hit Empire State Of Mind with Jay Z.

Keys discovered her love of piano at six years old and attributes the scene in Philadelphia where Tom Hanks listens to opera as her discovering that she could express herself through music. Born and raised in Hell’s Kitchen, when it really was the gates to Hades, she was often exposed to crime, prostitution, drugs and unwanted attention, leading her to wear gender-neutral clothes and cornrows. But spending more time in Harlem as a teenager surrounded her with cultural and ethnic diversity, and this is where she met Kerry Brothers Jr, her longtime musical collaborator.

Like many albums this year, Alicia was scheduled for an early Spring release, but this was postponed due to the coronavirus pandemic and burst onto the scene like a Beyoncé drop in recent days. A counterpart piece to her memoir More Myself: A Journey, Key’s seventh album is pitched as an introspective journey and has some special guests along for the ride, such as Jill Scott, Khalid, Miguel and Sampha. The album kicks off with the wistful intro Truth Without Love, with her beautiful trademark ivory tinkling juxtaposed with jarring prose. Time Machine advocates mindfulness and forward thinking, rather than overanalysing and harking back to the past, against a backdrop of retro-funk and sitars, with some divine vocals.

There is euphoric optimism on Authors Of Forever, with a gorgeous haze of Lionel Richie‘s All Night Long, yet a more desolate sense of despair prevails on Perfect Way To Die, a heartbreaking tribute to those mercilessly killed at the hands of police brutality. Gramercy Park is a slow country infused jam that warns of the dangers of people-pleasing, and there is a sultry tribute in Jill Scott. The album’s stand-out is the lofty Love Looks Better with trademark Ryan Tedder shimmer and bombastics, and some celestial piano and vocals. R&B ballads Show Me Love and 3 Hour Drive seem to pale in comparison to the more jolting moments, yet this could be Keys’ way of telling us that it’s not all hopeless.

The delay in the album’s release could well have lent a more reflective and therapeutic lens for its audience. Underdog is an ode to student doctors, key workers and single mothers with its sweeping Caribbean folk, and forms a poignant love letter to the underestimated and those taken for granted while trading in her own youthful experiences. The album closes with Good Job and is Keys’ more genuine Thursday night clap for all of the essential workers who have kept the wheels turning, but have been taken for granted, then and even now.

Keys has pitched this album as genreless and, although the sonics are manifold – reggae, R&B, funk and even country – you get the sense that Keys has her eyes more on the narrative. There is genuine hope, despair, frustration and even ambivalence. In a world more in need of a key change than ever, we need this Alicia.