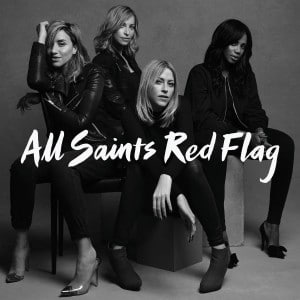 We’re just past the middle point of the decade, so that means we must be due a new All Saints album. The quartet livened up the back end of the ’90s with a string of excellent singles, before famously splitting up over an argument about who would wear a particular jacket in a photoshoot. Then, in 2006, they suddenly reappeared again with the disappointingly tepid Studio 1 album – it was pretty clear that their heart wasn’t it (Melanie Blatt said afterwards she’d only taken part for the money) and the reunion soon fizzled out like a damp squib.

So, it was a bit of a surprise when it was announced a couple of months ago that Blatt, Shaznay Lewis and the Appleton sisters were back together and a new album was on the way. It wasn’t so much of a surprise though that the lead single, One Strike was so good – let’s not forget that, beneath the tabloid column inches, celebrity relationships and that truly terrible film that the Appletons made with Dave Stewart, All Saints always knew how to write a great pop song.

And, thankfully, Red Flag is full of them – this is certainly closer to the group’s heyday of the mid ’90s than anything that was on Studio 1. It’s inevitably a more reflective and mature record, but that old chemistry has certainly clicked into place. One Strike makes for an excellent reintroduction into their world: written by Shaznay Lewis, but inspired by Nicole Appleton’s break-up with Liam Gallagher, it’s a lilting, defiantly emotional number that, musically at least, brings to mind one of their finest moments, Pure Shores.

Another tale of marital strife, One Woman Man, is even better – blessed with a huge chorus and some sumptuous harmonies, it may be the finest thing on here, while Make U Love Me rolls back the years with a slinky, shuffling presence. It’s on tracks like this that you struggle to believe that All Saints have been away for a decade, so easily do they slip back into today’s pop landscape. You could certainly imagine songs like Puppet On A String or the terrific, handclap-infused title track holding their own against the Little Mixes of this world.

There are patchy moments on Red Flag though – there’s one too many stately ballads, and so for every epic moment like This Is A War, there’s the rather drippy, nondescript Fear, or filler track like Who Hurt Who. Then there’s the dancehall-influenced Ratchet Behaviour which is presumably meant to sound sassy and aggressive but just ends up being gratingly irritating (although it does have the brilliant line of “scanning me like a barcode” to describe that moment just before a cat-fight breaks out).

Yet ultimately, there’s far more good to be found on Red Flag than there is bad – this feels like the genuine follow-up to Saints And Sinners that Studio 1 should have been. Ultimately, the pop world is a far brighter place with All Saints in it: and as the spacey synths of the gorgeous closer Pieces fade away, you can only hope that we won’t have to wait until 2026 to hear the next chapter of their story.

All Saints MP3s or CDs

All Saints on Spotify