Allo Darlin’ – We Come From The Same Place 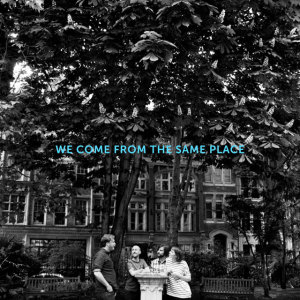 Undisputed leaders of the indiepop pack Allo Darlin’ dealt themselves an uneviable hand following the release of their first two records. Appearing in 2010, their first, self titled, album established the Anglo-Aussie four-piece’s position as the elder statesmen of the bourgening Fortuna-POP!-led scene, full of chirpy, happy go lucky pop nuggets.

Its follow-up, 2012’s Europe, showcased a different side to them; one that even more studious indie fans could enjoy. The enthusiastic, hyper sound of their debut was gone, replaced with a more subdued, sentimental, tear-fuelled feel. But the music industry is a cruel mistress, and this gloomier sound propelled them to new heights; receiving reviews in the more po-faced mags. It even clinched ‘album of the week’ at Rough Trade.

So that’s a loyal – almost cultish – fanbase gathered with one record, wider aclaim with the next. So where to go now? Luckily for all who enjoyed their first two outings, the answer is a slightly more polished blend of the two. And it’s brilliant for it. Musically We Come From The Same Place is pitched somewhere between the two; a healthy dose of upbeat, indie disco tracks sit alongside the more introspective, woozy songs that dominated Europe, but delve a little closer and it’s the lyrics that will bring out the amateur pyschologist in you.

On the surface the reason for the change in tone and sound is obvious; frontwoman Elizabeth Morris married and moved to Florence with her husband last year, leaving various members of the band to flirt with side projects (notably Paul is now playing with fellow Fotuna POP! darlings The Tigercats) – and there’s a general sense of contentment throughout. Take History Lessons for example. A tear jerker from the start, it relies on Elizabeth’s trademark ukulele strumming to shape a tale of someone who’s scared but excited; the old heart vs head dillema: “I believe we can make it, but the burn has left its mark / What came before doesn’t have to have been the best.” It’s full of the memories, nostalgia and tinges of regret that characterised Europe, but it’s also charged with a sparkling, ever present optimism.

With Europe Morris established a delivery so incredibly personal it almost feels wrong to listen in; like you’re flicking through someone’s diary, getting an insight that’s at once juicy, scandalous and delicious, but also dark and intense, and that’s further honed here, her vocal style still whispered, apprehensive, conspiratorial.

See also Angela, an ode to a heartbroken friend: “If I had more than a penny I’d take this flight to New York City and come see you in / The hardest thing we have to learn is when those who we love us don’t love us in return.” She goes on to wish she was drinking wine and dancing in her stockings in Angela’s kitchen. It’s Allo Darlin’ by numbers; a warm hug that leaves you feeling fuzzy and satisfied, but also liable to burst into tears. Those looking for some straighter edged fun will enjoy Half Heart Necklace and Kings And Queens, which are bounce alongs that recall the sounds of the band’s earlier efforts; the latter an update on My Heart Is A Drummer. Bright Eyes sees guitarist Paul share vocals – a boy/girl vocal battle that’s irresistibly good fun.

With We Come From The Same Place, Allo Darlin’ have nailed it. They’ve not done what so many bands seem tempted to do by album three and shifted sound beyond all recognition; it still sounds like them – just an improved, sharpened up them. And it’s wonderful for it; their best yet.