by Gareth Ware
published: 7 May 2012 in Album Reviews
Tweet 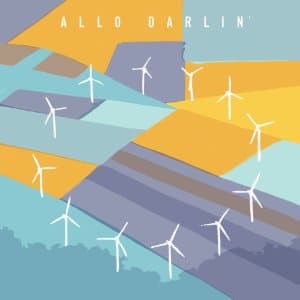 In his tome 31 Songs, Nick Hornby suggests that while there’s a place for the difficult sonic effects of the like of Suicide‘s Frankie Teardrop (and one suspects, the likes of the band-as-a-marketing concept of ‘subversive art collectives’ such as Breton or WU LYF), ultimately there’ll always be a place for warm, genuine music – a sort of aural cuddle after a crap day. It’s a concept that Anglo-Aussie quartet Allo Darlin’ took and ran a mile with two years ago on their irresistibly charming and near-universally acclaimed début.

But to an extent things have changed in those two years. Whilst head honcho and songwriter-in-chief Elizabeth Morris is quick to point out that while sophomore effort Europe isn’t a heartbreak record, it reflects a time not only of personal uncertainty (her visa was being reviewed at the time) but also civil unrest in the country during its conception. Making an album of carefree pop singles as per their previous effort would seem frivolous, self-indulgent almost.

Musically, Europe offers a natural progression and evolution from the début; a logical step one could argue, given how well received its forerunner was. But while the band themselves will readily admit that their last record was made with an element of intrinsic naivety – a love affair of being in a band, if you will – and not looking too far beyond having fun making it, Europe drips with confidence. Morris’ voice has developed from a bashful near-whisper to a husky, Chrissie Hynde-esque burr. Likewise, Bill Botting’s bass and Michael Collins’ drums have been suitably beefed up to match, with Paul Rains’ rolling guitar lines being given more room to breathe in the mix to boot. Having always felt like one those bands that just works, it’s a view that’s comprehensively backed up by Europe’s assured, accomplished air – whether it’s the punchy Capricornia and Still Young, the infectious shuffling of the title track and Wonderland, or the spellbinding minimalism of Tallulah.

As musically adept as it is, it’s Morris’ words which provide not only the focus but also a veritable treeful of cherries for an already liberally decorated cake. As richly detailed as they are touchingly personal, they see Morris’ school of songwriting develop markedly record-on-record, concluding in a style that partly nods towards fellow storytelling extraordinaires David Tattersall (The Wave Pictures) and Jens Lekman whilst simultaneously carving out a style all of her own.

Throughout the album there’s a real sense of conviction behind the lyrics, no more so than on the devastating, heartbreaking lament Tallulah, which sees Morris reminisce about bars that play The Maytals and car trips soundtracked by The Go-Betweens before candidly stating “I’m wondering if I’ve already met all the people that’ll mean something”. Likewise, when on lead single Capricornia she sings “we will set the world to rights/when I find you/under Capricornia skies” it seems both heartfelt and unwaveringly believable, as does the “I’ll remember these nights always” refrain on the lush, string-laden title track. Penultimate track Still Young, meanwhile, is not only the group’s most propulsive and downright anthemic moment to date, but also demonstrates Morris’ ability to mine a rich seam of Bruce Springsteen-esque songwriting at will. From the dark verses of resignation (“Do you know how it feels/to be lost in the crush when you feel so down at heel”) it builds to the chorus’ fist-in-the-air closing couplet of “But we’re not done/’cos we’re still young!”.

Allo Darlin’ have achieved their aim of not producing a carefree record again, and then some – instead, they’ve created one of considerable, admirable depth and nous, though it retains the warm, personal nature of its predecessor. Staggeringly intelligent and breathtakingly emotive, it’s pop music at its finest, contained not by genre or demographic boundaries. Morris has joined the likes of Jens Lekman, Stephin Merritt and Jonathan Richman in alternative pop music’s great storytellers that deserve better than the constraints of the indie-pop tag. Beautifully poignant, it feels less like a set of songs and more like a collection of memories you’ve yet to experience.