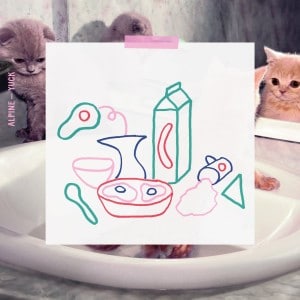 Appearing in 2010, Melbourne six-piece Alpine surprised quite a few people through the cunning expedient of being a sunny antipodean indie-pop band that sounded more like icily cool Scandinavians.

Early singles Heartlove and Hands combined low-in-the-mix electric guitars and propulsive synthesiser lines with joint vocals from singers Lou James and Phoebe Baker, their eerily similar voices lending an instantly distinctive tone. Gasoline, taken from 2012’s A is for Alpine, took some of the same elements, threw in some jazzy raked guitar lines and welded them to an irresistible, seductive hook.

The album was received well and the band toured extensively for two years. They now return with second LP Yuck, which they say deals with reactions to awkward situations and “first world problems”.

Come On opens the album with a marriage between what sound like shredded samples of The Art of Noise’s Moments In Love and R&B harmony vocals and chirruping guitar refrains that appear to have been beamed in from Dirty Projectors’ remarkable Bitte Orca. It’s both ‘come on’ as breathy enticement and a literal ‘come-on’: “In the night when I cry could you hold me tight in your bed?/I’m vulnerable, you are too, let’s lie instead.” As an opening, it’s a far cry from A is for Alpine’s discofied Lovers 1 and 2, and seems to set the tone for the different sounds and textures that guitarist and co-producer Christian O’Brien wanted to explore.

The delicious lead-off single Foolish is up next, the chorus of which gives the album its title, about the feeling of being with somebody you shouldn’t. It’s a would-be, should-be sassily swaying summer smash, TLC via under-appreciated Aussie twee-poppers Frente!, as prime a piece of pop to be “foolishly attracted to” as anything from their début. A fine opening trio is completed by Crunches, which revisits their earlier percussive, dancefloor ready sound and bears one of those wordless singalong arms-aloft choruses that’s destined to go down very well at a festival near you very soon.

Unfortunately, Alpine struggle to find the same ingredients – or at least the recipe – that made their first album a joy, and the majority of the album seems to pass by in an indistinct haze, a little over-reliant on a fairly homogenous production. There are certainly moments to enjoy: the springy synth stab hook of Shot Fox, Up For Air’s bittersweet chorus or the queasy swing of Jellyfish, dealing with the pitfalls of the constant pursuit of bodily perfection. But taken together, it’s all a little too ‘music to browse Urban Outfitters by’.

A late highlight, however, comes in the shape of Damn Baby, announcing itself (“Hey, I’m here, and I’ve been willing to jump right in for years now”) with bold brassy stabs breaking the miasma and a cheekily insouciant vocal refrain.

It’s an all-too brief flicker, though. The up-tempo but unremarkable Standing Not Sleeping follows, with another bolted-on euphoric festival-friendly chorus, before the album limps to a close with what may be its weakest track, Need Not Be, a combination of components that never seem to cohere: a sample of rainfall here, high pitched vocals here and a jarring brassy line there.

Rather like a mountain range, Alpine’s first few releases had their dizzying deoxygenated highs and downhill rushes. Yuck, however, sadly comes off after several listens as a little flat, the low points seeming all the more so for resting, as they do, in the shadows of the occasional peaks. Perhaps it’s best to ignore all that, stick Foolish on repeat, and hit the slopes (or should that be the beach?).