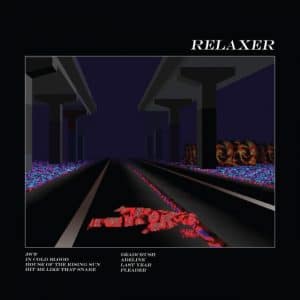 As Alt-J enjoyed the hype around debut album An Awesome Wave, comparisons to Radiohead were frequent. Since then the band have taken the comparisons to heart; rather than seeking to belong to the the catch-all ‘alternative’ genre, they appear to have gotten progressively more experimental until arriving at the point where they can best be described as hipster. The band’s name – the shortcut for a triangle icon on Apple computers – is, if not quite peak hipster, at least ambling up the foothills.

Normally albums will feature at least a few songs suitable to radio playtime or arena performances. For the most part, Relaxer lacks these songs, instead preferring to pursue a sound set quite against perceptions of their music being enjoyable to listen to. Their decision to put their own stamp on House Of The Rising Sun, an almost universally-liked blues provision by The Animals, is baffling, with synth sounds and monotonic singing rendering the song entirely devoid of energy and substance. Much the same can be said of opening track 3WW, a slow, guitar-picking melody that fits the album’s name, being itself a “Relaxer” of a song. The first notes of Joe Newman’s vocal involvement sound like they’ve travelled centuries, from an age where Greensleeves was the embodiment of popular music. It is soulless and, put plainly, a bit dull. Its saving grace is a guest appearance by Wolf Alice’s Ellie Rowsell.

However, sandwiched between these songs is In Cold Blood, easily the album’s most listenable track. It features an effective blend of brass and keyboards, and a compelling story about a pool party that ends in murder. However, it’s as though the band decided that this is too objectively good, because the opening lyrics are “zero one one one zero zero one”, which appears to be part of the band’s triangle icon in binary code. Rather than risk their music being merely normal, Alt-J attempt to experiment until arriving at Radiohead-esque results. Nonetheless, this is a successful song, as is Hit Me Like That Snare. The lyrics are dripping with intriguing sexual imagery, “floor full of happy wizards scissoring” and “this is my family fisting me on the floor” being obvious examples. Suggestive screaming reminiscent of Led Zeppelin’s Black Dog provides unexpected swagger.

The lyrics, for the most part, are difficult to understand, but Newman’s growling enunciation and the accompanying bass riff make their intentions clear. These songs, followed by the equally promising Deadcrush, suggest that there is life in the album. However, the first single, Adeline, unsuccessfully attempts a haunting melody that loses the interesting parts of its predecessors. Self-indulgent, even with its late crescendo it offers little to raise pulses, or even to entrance listeners expecting slow melodic music. The lethargic vocals do this song no favours. Last Year is a little better, managing to convey some sense of beauty to excuse their lack of energy, thanks in no small part to contrasting female vocals. However, the album continues the downward trend that begins with the end of Hit Me Like That Snare.

Pleader, the final song, is what may be referred to as ‘peak Alt-J’. Instrumental for large parts, it features various woodwind and string instruments. With the outbreak of singing, beginning with “how green, how green was my valley”, the multitude of backing singers and symphonic accompaniment make the song sound more like an extract from Songs Of Praise than an offering from the same band responsible for Hit Me With That Snare. It does little to gel with the album’s other songs.

It adds up to a disjointed, uneasy compilation of songs, with the band seemingly refusing to conform to expectation. There’s nothing new there, but having experienced the more interesting sequence of songs in the middle of the album, it is disappointing that Relaxer reverts to type with tracks that are difficult to love. Alt-J continue to defy critics and expectations, but in doing so appear to be depriving listeners of reasons to continue listening.