Amanda Palmer – There Will Be No Intermission 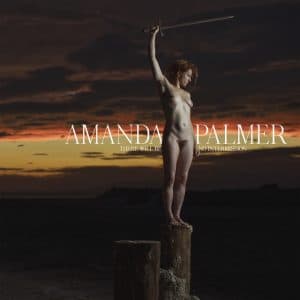 It’s fair to say that Amanda Palmer does not do things by halves. In the seven years since she last released an album, she’s written a self-help book/memoir, performed several reunion shows with Brian Viglione as The Dresden Dolls, became a mother and recorded an album of cover versions with her 72-year-old father.

And now she’s found time to eventually release her third solo album, and like her previous work, it’s rather lengthy. Standing at a whopping 78 minutes and 20 tracks, there’s an awful lot to get your teeth into. Even discounting the fact that half of the tracks are short instrumental interludes, none of the 10 remaining songs are less than five minutes long, with three of them passing the eight-minute mark.

Yet if you’re willing to put the time in, There Will Be No Intermission is never less than a compelling listen. As ever with Palmer, it always feels like it’s on the verge of veering wildly off course, and her well-known tendency to wear her heart on her sleeve can lead to some uncomfortable moments (Bigger On The Inside is an eight and a half minute response to people who criticised her for writing a poem dedicated to Dzhkhar Tsarnaev, the Boston Marathon bomber).

Yet her trademark honesty serves her well, for the most part. The Ride is a beautifully laid-back mediation on life, referencing Bill Hicks’ famous line that “it’s just a ride”, and concludes that “the alternative is nothingness, we might as well give it a try”. At over 10 minutes long, it could probably do with some editing, but it’s an unarguably affecting listen.

Most songs here are performed solo, featuring Palmer’s favoured instruments of piano and ukulele. The austere arrangements work well, especially on the standout song Voicemail For Jill which mulls over Palmer’s own experience of abortion. Taking on the form of a voicemail message left for a friend, there are lines like “it’s a strange grief, but it’s grief” and notes the irony that “when you have a baby, they throw you a party, and then when you die they get together for a cry” but nobody holds any similar recognition for pregnancy terminations. As with a lot of Palmer’s material, it’s slightly clunky and awkward, but the self-consciousness makes it all the more effective.

It’s that honesty (so often derided by too many as attention seeking) that gives There Will Be No Intermission its heart. On almost every song there’s a line so striking it almost punches you in the gut – whether it be The Thing About Things “I call my grandfather, and he doesn’t answer, and I have to make peace with that fact”, or the reference to her late brother on Bigger On The Inside.

Even though there are moments that skirt close to self-indulgence – there’s an entire song dedicated to celebrated author Judy Blume which still somehow works, while Bigger On The Inside stops being a heartfelt defence after a while and just turns into a bit of a whine – and you’re left with the impression that a sympathetic editor would do wonders for Palmer, there are still some heart-stopping moments of beauty on this third album. While she’s destined to rub some people up the wrong way, there’s still an awful lot to admire about Amanda Palmer.