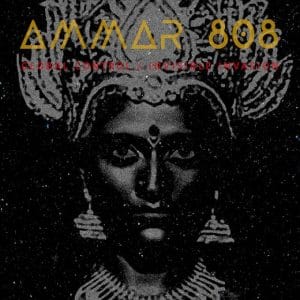 Over recent years Sofyann Ben Youssef has collaborated with a number of other artists, from his link up with fellow Tunisian Nidhal Yahyaoui under the Bargou 08 name to producing youthful Touareg guitar outfit Kel Assouf and working with Paris-based electronic collective Acid Arab. 2018 saw him release Maghreb United, his first album under the AMMAR 808 alias, a record that merged the sounds of North Africa with bass and electronically derived rhythms. On second album Global Control / Invisible Invasion he focuses his attention on the music of south India, and it sees him arguably deliver his boldest statement to date.

The album features recordings of several local musicians and vocalists that Youssef met during a visit to the bustling south Indian city of Chennai. What follows is a successful exercise in taking carefully curated source material and creatively augmenting it into different forms. In one respect it’s unflinchingly modern, especially in how the electronic elements are deployed but a sense of history and tradition is never far away. When the two are put together it feels like almost being witness to a strange, musical version of time travel.

Traditional Carnatic song Marivere Gati is given a polished upgrade, being the first of three tracks to feature the silky vocals of local singer Susha. Like most of the album, it sounds immediately corporeal and tactile. Ey Paavi, featuring vocalist Kali Dass, feels even more raw and unrelenting, showing how Youssef can create pulsating music that excites and inspires.

Duryodhana offers more in the way of intensifying rhythms and also features the reedy sounds of the nadaswaram. It brings to mind the music of Omar Souleyman and by the end there’s a distinct sensation of walls beginning to close in around the listener. Geeta Duniki brings light and openness to offset some of the earlier heavier moments and shows how, despite the overarching theme, there are contrasts to be found within the album.

Pahi Jagajjanami might be the most balanced synthesis on the album, with the snaking bassline, tightly channelled synths, driving beats and Susha’s flickering vocals coming together in heady fashion. Tracks like this and closing piece Summa Solattumaa seem to capture the very density and fabric of the city where it was formed, while the album as a whole stands as a testament to the pursuit of musical discovery.