Ana Roxanne – Because Of A Flower 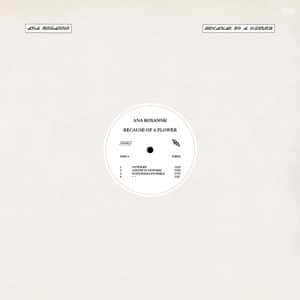 If you’ve ever been to visit Kew Gardens’ balmy and immersive Palm House in the height of golden summer, and found yourself submerged beneath dense tropical foliage and smeared panes of glass when the sprinklers come to life, hissing and twitching spasmodically from on high, as they leisurely mist the verdant flora below with fine sprays of chilled water, then you’ve come somewhere near to the pleasure you get from listening to the magical new album Because Of A Flower by Californian ambient musician Ana Roxanne. Containing many of the elements that defined her startling 2019 debut ~~~, these are seven transcendentally harmonious pieces of music that recall the intense delight of cool precipitation upon prickly skin.

On the album’s untitled spoken word opening track, Roxanne’s reassuring voice gives simple explanation to the manner in which binaries split to fashion rhizomes of potentiality. Her clear timbre begins overlapping and varying its tempo, dropping and raising pitch to simulate masculine and feminine characteristics, until a chorus of many gendered and non binaried spirits, ‘the yin and the yang’, combine to generate closely layered harmonies. A Study In Vastness, a companion to her earlier track Immortality, lingers in the air obliquely, steeped in a series of rotating choral patterns that recall the affectionate but unmoored tracks laid by Liz Harris on her early Grouper releases.

On Camille, the record’s most accessible number, Roxanne’s melancholic singing brings to mind Low’s Mimi Parker, the quixotic slowcore mingling of spiritual beatitude and emotional disenfranchisement, as a jittery organ motif and whooshing embryonic duel with cinematic samples of Francophile discontent. There’s more instructive spoken word on Venus, in which Roxanne intones in what way “changeable, accepting, merging, water moves fluidly from one form to another, easily transitioning from cloud to raindrop to sea”. The choice of subject matter and the usage of the word transitioning appear to be a judicious choice, perhaps referencing to the artist’s own recent declaration of self-identification as intersex.

Sliding around Suite Pour L’Invisible, a pendulum of muffled to and fro bass lines act as metronome for Roxanne’s husky serenading to tether themselves upon. Comparable bass punctuations dart across the beginning of the continuously shifting final track Take The Thorn, Leave The Rose as it fluctuates from mournful post-rock to softly blooming choral murmurs taking in crackling static of field recordings, before the rain sweeps it away.

The message of the record is as faultless and as invigorating as the field recordings of raindrops and tributaries that gush over it. Ana Roxanne won’t be hampered by other people’s definition of her; her musical genius will encapsulate multiplicities and blossom of its own accord.

More on Ana Roxanne
Ana Roxanne – Because Of A Flower