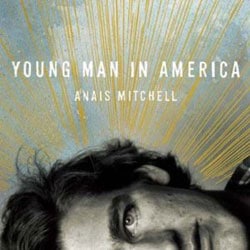 You could never accuse Anaïs Mitchell of doing things by halves. Her last album, Hadestown, was an impossibly ambitious folk-opera about the Ancient Greek myth of Orpheus and Eurydice. The supporting cast of names like Bon Iver‘s Justin Vernon and Ani DiFranco only added to the epic feel of the album.

For the follow-up, Mitchell has narrowed her scope, but the ambition remains. Although there’s no central concept (and no guest stars) this time round, all these songs touch on weighty matters like recession-ravaged America, the trials of parenthood and failing relationships. With every track having what sounds like an infinite level of care lavished upon it, Young Man In America is already an early contender to be one of the best albums of 2012.

Teaming up with producer (and DiFranco’s sometime bass player) Todd Sickafoose again, Mitchell has crafted a beautifully subtle landscape for these songs, full of lightly brushed percussion and finger-picked guitars and mandolins, while the odd accordion and fiddle floats by in the background. The focal point though is Mitchell’s distinctive voice, one that mixes the child-like wonder of Joanna Newsom with the yearning urgency of Shawn Colvin.

Mitchell’s father is a huge influence on Young Man In America – it’s his face on the cover art – with one track, the tragic Shepherd, based upon a short story which he wrote some 30 years ago. A love of language obviously runs deep in the Mitchell family. The title track tells the tale of a man desperate to make his mark on the world with the arresting opening line: “My mother gave a mighty shout, opened her legs and let me out, hungry as a prairie dog, young man in America.”

There are little touches like that to be found everywhere – the put-upon spouse pleading with his wife for mercy in the wistful Annemarie (“I’d walk a hundred miles on my knees to see you smile, all you do is frown”), and the album highlight of Tailor, where Mitchell casts herself as the easy to please lover who changes occupations just on the say-so of her lover, who then promptly departs, leaving her with no sense of identity.

There’s a deep sense of sadness permeating through the album: the aforementioned Shepherd tells the tale of a man battling to save his harvest while his wife dies in childbirth, while Coming Down is a beautifully fragile piano ballad, each minor chord sounding like a stab in the heart, especially when accompanied by Mitchell pleading “please…please don’t leave”.

None of this is depressing or maudlin though. There may be only Venus which raises the tempo somewhat, but there’s a warm, comfortable feeling to each of the 11 songs, helped in no small matter by Mitchell’s voice – it may be an acquired taste to some, but it works a treat here, especially on tracks like Dyin’ Day and You Are Forgiven.

In fact, by the time the swaying horns and chiming chords of the closing, six-minute long, Ships comes to its end, you realise you’ve been listening to something very special. With Young Man In America, Anaïs Mitchell has created her second consecutive masterpiece.