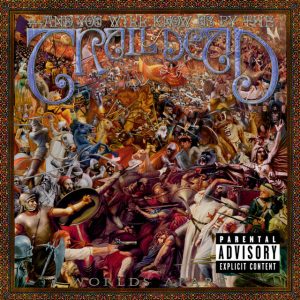 And You Will Know Them By The Grim Augury Of Their Nomenclature.

Confession time first. Worlds Apart is this contributor’s first confrontation with the baleful beast that is …And You Will Know Us By The Trail Of Dead. Therefore, I enter as if a babe-in-arms, into the world of Conrad Keely and Jason Reece, risking foul perdition, and seduced by the ace-st band name in Rock.

And You Will Hesitantly Acknowledge The Diversity of Form .

Worlds Apart dares to be (for the sake of brevity) ‘The Trailers’ fourth album, and is said to represent something of a break with their tenebrous canon. This is certainly true if the back catalogue doesn’t include the following: Classical interludes; Pixies-patented, Nirvana-marketed loud bits / quiet bits; Brooding strings; Remonstrative lyrics that may or may not be internally directed; Ruminations about the band’s place in the scheme of things; and occasionally successful stylistic diversions.

And You Will Be Slightly Disappointed By The Centralism Of Their Art.

Worlds Apart itself asks ‘What is the future of rock ‘n’ roll’ and replies ‘I don’t know, does it matter?. Reece crystallizes the conspicuously consumptive world of the music biz as ‘this candy store of ours’. Perhaps it was too much to expect fields of existential enquiry rather than the well-tilled lawns of superstar introspection. Though there are some nice Green Day style summations of the current state of America an’ all that jazz, some bog-standard punk-pop dulls the barbs, even if Keely does a fair impersonation of Shane MacGowan‘s gruff disgust.

And You Will Attest To The Eternal Righteousness Of The Axe.

Conrad Keely has gone back to school, and delved deep down, that’s deep deep down, into music theory. Presumably, this has resulted in the courtly, digressive, fol-de-rol of The Best. Despite the scholarly ambition, when the guitars are unleashed with effects-pedal splendour ( particularly on Let It Drive and Caterwaul), Worlds Apart’s grand ambition achieves illumination.

And You Will Spot Historical Precedent In The Edwardian Get-Up Of The Promo Shots.

Worlds Apart contains just more than a hint of the petit-bourgeois disdain towards popular culture that gave rise to the muso indulgences of the early-’70s. The ‘mythic dreams never last’ of Summer 91 is a modern counterpart to Jimmy Page in country-mansion repose.

And You Will Defer To A Higher Authority Of Professorial Wisdom.

No less a figure than Brian Eno (so good they named an opera house after him) claims that backing vocals are a statement of the desire for community (or something like that). Perhaps it is this that makes All White one of Worlds Apart’s more inclusive moments. Maybe its Eno’s dictum that explains how the multi-tracked harmonies of City Of Refuge is the album’s most empathetic and emollient statement.

And You Will Acknowledge That The Kids Will Love It Anyway.

If Worlds Apart is intended to wrest some middle-ground territory newly marked by the aforementioned Green Day, its too uneven to achieve mass conversion. If it is indeed that dreaded change of direction oft-intended to affirm artistic independency, it’s one that is more likely to enrich their standing with the Trailer-Heads out there, rather than leave them behind. You Will Know Them By The Trail Of Modestly Gloomy Youths.