by Thomas May
published: 22 Oct 2012 in Album Reviews
Tweet 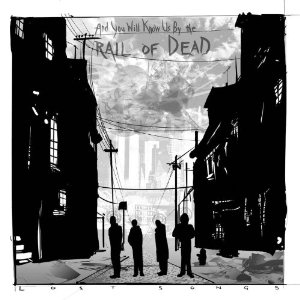 It’s almost impossible not to be rooting for this record. A cursory read of any of the interviews being published in promotion of …And You Will Know Us By The Trail Of Dead’s eighth album will leave no doubt as to the admirable motivation behind Lost Songs. Summing up their stance in the accompanying press release, the band writes: “the music was inspired by the apathy to real world events that has plagued the independent music scene now for over a decade.” Although Trail Of Dead may not be entirely unique in calling out the currently endemic lethargy in indie music (neither have they been particularly hasty in doing so), this statement suggests that Lost Songs might just be the perfect antidote to the insipid superficiality of current alternative music scenes, with all their ironic posturing and self-conscious naivety.

For a band to emerge with a work attempting so explicitly to address political issues seems rather brave in today’s post-Retromania musical context: such sincerity is likely to be perceived as rather unbecoming. Yet, earlier this month, that long-dormant titan of Canadian post-rock Godspeed You! Black Emperor released their first record in nearly a decade and, despite continuing exactly as they were in 2003, managed to sound just about as vital and as relevant as ever. Indeed, if we can take only one thing from ‘Allelujah! Don’t Bend! Ascend!, it’s that there really is space for politically and socially incendiary music to exist, and thrive, in the here and now.

Yet, despite its promise, the considerable musical failings of Lost Songs ensure that its potentially positive impact is unlikely to be widely felt. Beginning from a suitably ominous nucleus of a low synth drone skirted by shards of guitar noise, album opener Open Doors soon dives headlong into a brutal, pounding sonic assault. With little concern for dynamic shaping, or indeed melodic or rhythmic complexity, the track continues for the next four minutes in an undifferentiated stream of compressed noise. In plunging headlong into the on-going, and highly destructive, loudness war of major label music, Open Doors forms a remarkably disappointing introduction to an album that has been so carefully situated outside the mainstream by the band.

Regrettably, Lost Songs displays few signs of improvement over the remainder of its duration. Standout track Opera Obscura offers a welcome appreciation of contrast and musical development as it contorts through a sinister labyrinth of clattering percussion and searing guitars. For the most part, though, the relentless sonic battery of Lost Songs is simply wearing. Every sound on this record is brittle and thin: there is no wash of visceral noise to immerse oneself in here, only a frail, two-dimensional surface of ugly sound.

Being an album with such a self-proclaimed political agenda, Lost Songs’ lyrics are inevitably going to come under scrutiny. With couplets like “a father cries, a soldier dances / streets of fire, raped bodies piled among the ashes” in a song purportedly about the Syrian civil war, Trail Of Dead display the difficulty of dealing with such issues musically: this album is either overly clumsy in its attempts to make its points explicitly or, when operating more abstractly, appears immature in its undirected angst. Perhaps this epitomises the difference between Lost Songs and Godspeed You! Black Emperor’s latest album. Through interviews, album artwork and press releases, both have carefully constructed a meta-text of political ideology around their music. Yet, where the former is crippled by its self-conscious explicitness, the latter remains mysterious and aloof in its ambiguous allusions. With Lost Songs, Trail Of Dead certainly have their hearts in the right place; sadly, though, that’s the best one can really say about this album.