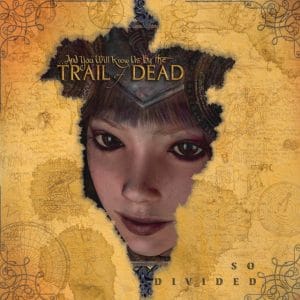 …And You Will Know Us By The Trail Of Dead have been through a torrid time of late. First of all there was the loss of bass player Neil Busch, then their previous album Worlds Apart received a lukewarm response from the world at large and was effectively buried by their record company.

This was a huge injustice because Trail Of Dead had made huge sonic steps forward with that album in particular, producing one of their most ambitious and finest records. It almost proved too much for the band, and Conrad Keeley (vocalist, guitarist, songwriter and instrument wrecker supreme) freely admits he considered packing music in altogether after the disappointing response to Worlds Apart.

So we’re blessed that the band have managed to keep it together long enough to present us with So Divided. Originally intended as a mere EP, the band hit a rich vein of form, and came up with an entire album’s worth of material, and much of it could well be described as their best work to date.

Stand In Silence kicks off proceedings in relatively familiar fashion, pounding drums and a riff that might have been plucked straight from any number of ’70s rock bands. That said, it’s a song that puts melody above chaos: something that the band have slowly taken on board. Early on they were frequently likened to Sonic Youth, due to unusual guitar tunings and the huge layers of guitar squall that inhabited their songs.

What is evident from the moment Stand In Silence begins is that Keeley is standing by his vision for the band that started with Worlds Apart, and continues on this album. From the conventional rock verses (which seem to be dealing with Keeley’s disillusionment with the reception of the last album) through to the beautifully orchestrated mid section Trail Of Dead appear to have dropped the noise, and bought out the tunes.

It’s not just a one off either, the piano lead Wasted State of Mind lurches broodingly, letting Keeley’s vocals take centre stage, and showing how far his voice has come over the years. Naked Sun picks up a basic blues riff and explores the possibilities of the pop song. It must be noted that whilst discordant saxophone solos and explorations are not the kind of thing that pop songs are made of these days, Naked Sun quite rightly asks “why the fuck not?”

Gold Heart Mountain Top Queen Directory is a cover of an old Guided By Voices track, and it finds the focus falling on a piano, whilst the band explore orchestral movements and vocal harmonies. It’s a perfectly polished track, and it takes the original and adds several layers to create something quite beautiful.

So Divided takes us of in a prog rock direction, clocking in at a reasonably epic six minutes. There are hints of the old Trail Of Dead here with a rumbling snare and guitars that sound as if they are being beaten to within an inch of their lives. There’s also a huge amount of control being exerted however. In the past it’s the kind of thing that might have simply disintegrated into a wall of feedback, now the band are holding back and creating songs that are cathartic without trashing instruments and each other (something that made their name as a phenomenal live band, but perhaps also diverted attention away from their perfectly realised songs.)

Witches Web provides us with a bridge between this more mature Trail Of Dead and the band from the days of Madonna. It first appeared on the Peek-a-Boo Book of Spells compilation back in 2000. At the time the falsetto vocal harmonies, acoustic guitar and piano it seemed to be a cheeky diversion to what the fans were used to. With So Divided and Worlds Apart as evidence, it now looks to have been a statement of intent, and that alone merits its inclusion here.

Sunken Dreams which closes the album is perhaps the closest we get to anything that really resembles old Trail Of Dead material. Starting life as a Velvets inspired romp, it drops away into a mid section filled with chiming guitars and a Jason Reece monologue that calls to mind The Doors. Finally, it builds to a climax packed with thunderous drums and a choir reaching what can only be described as spiritual heights. It’s a fitting end for a record: remembering the past, but also pointing the way forward.

Conrad Keeley may have recently moved to New York, leaving Jason Reece, his partner in crime behind in Austin Texas; geographically dividing the band, but on this evidence, Trail Of Dead couldn’t be more together.