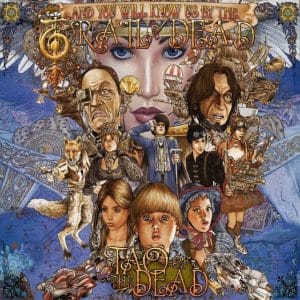 Yet this is something …And You Will Know Us By The Trail Of Dead have always done, often to part-ridicule. Tao Of The Dead really straps the listener to the rocket, cutting the vocal parts to a minimum, though vocalists Keeley and Reece pound in with immense impact when they do contribute. This is orchestral, powerful, sexy prog-rock. Whereas Madonna and Source Tags and Codes ripped guitar music a new, dusty, ass at the turn of the Century, …And You Will Know Us By The Trail Of Dead’s move to Interscope saw an unhappy lack of support as the band moved away from their gothic spite and deeper into the world of orchestrated magnificence that many at the time took for two albums of pomposity, instead preferring the more immediate street serenades of The Strokes.

Since moving away from the major and on to Superball, their music has reflected their condition; the fat of immense orchestration has gone, and the band are leaner and keener to capture that same spike of emotional pull but with a bigger band, not a bigger range of accompanying instruments and recording tricks. This makes Tao Of The Dead land the right combinations at the right time, as Pure Radio Cosplay starts the album proper with a swagger akin to Let It Bleed era Rolling Stones, though amplified and kicked off the gear.

The album trails with motifs in the finest tradition. Pure Radio Cosplay (Reprise) trembles and flutters with the insistence of Pink Floyd‘s most intense analogue waves, building toward an anger that valiantly battles with temperance but inevitably fails, the attitude slashing back in over the soft riffs, further throwing alternative bass notes in that weave dizzying polyrhythms. For Ebb Away the pace is taken down momentarily and scratched guitars strung out like violins, the vocals come forward and are delivered with a mechanical beauty. This could be robots programmed to croon, and as the vocal intensity and guitars grow for the choruses it only gets better.

As the album closes with its two longest songs, The Fairlight Pendant and the segmented Tao Of The Dead Part Two: Strange News From Another Star, everything that is so unique about the band is paraded once more to tie the curtain closed. The musical segments blend together seamlessly; guitar jams that never cease to stop soaring forward with a power The Mars Volta couldn’t touch and without the need to delve into other musical modes to come across as attention guzzlingly complex and rewarding. It’s this ability to swallow the listener that pervades throughout Tao Of The Dead and …And You Will Know Us By The Trail Of Dead themselves. This is a declaration from band that are never to be repeated, or bettered for the collision of power and grace, anger and beauty. A genre defining release and a welcome return to boundary surfing music.