…And You Will Know Us By The Trail Of Dead – X: The Godless Void And Other Stories 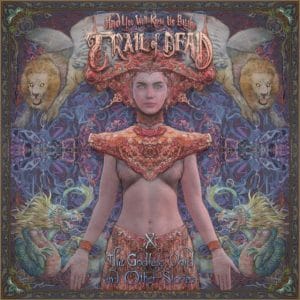 When …And You Will Know Us By The Trail Of Dead first started to make a name for themselves in the late 1990s, it seemed as if they might be one of those bands that burn brightly, explode and are never to be seen again. Their shows were chaotic, thrilling and ever so slightly dangerous, with smashed instruments and damaged band members being par for the course.

Anyone who caught them when they’d just released their second album Madonna will not forget the sheer ferocity that the band possessed back then. Mashing up Sonic Youth‘s discordant noise with snot nosed punk anger and an ear for a genuine pop hook meant that, even if they were trashing the venue, they did so with a modicum of melody.

Although it seemed likely that …Trail Of Dead would eventually take themselves out in a blaze of glory, they have somehow endured. X is their 10th album, and although some of the youthful bombast contained in the likes of Richter Scale Madness or Perfectly Natural might have been toned down somewhat, the band has managed to retain the essence of what made them such an exciting proposition back at the end of the 1990s.

The duo of Conrad Keely and Jason Reece are still at the heart of the band and have reverted back to their practice of switching duties as vocalist/guitarist and drummer, reclaiming some of the aesthetic that made them such an exciting band early on. Most important however is the pair’s desire to make music together, and after a break of five years (during which Keely moved to Cambodia and Reece worked on other projects) they’re back together making music again.

Informed primarily by themes of loss, X is nonetheless the sound of a band reinvigorated and enjoying working together again. It’s easy to forget that …Trail Of Dead has been together for 25 years and the Keely and Reece have been playing together since high school. That they’re continuing to make music that sounds this fresh and exciting, is a testament to the pair’s inventiveness and the creativity that they bring out in each other.

They’ve always had a great sense of dynamics, melody and beneath the even their most discordant moments, a pop sensibility. All of these elements are on show throughout X, but it’s fair to say that their ear for a hook is to the fore this time around. It’s in evidence in the soaring chorus of Blade Of Winter, a song that is part prog epic and part football terrace chant. Who Haunts The Haunter is a monolith of a song, that ebbs and flows threateningly. For just a moment, the vocal motif of The Smiths‘ The Headmaster Ritual drifts into the undulating thrum of the song, which is a nice little nod from …Trail Of Dead as they lose themselves in the eye of the storm.

There’s plenty of bombast to be found too, but as Keely and Reece have explained in the run up to this album, they’re writing pop songs but pop with a twist. More specifically, Keely describes their latest effort “not Top 20 pop. It’s the pop music I wish was on the radio”. So whilst All Who Wander starts off like something that you might find on a Sisters Of Mercy album before a drum fill brings that familiar …Trail Of Dead explosiveness, Keely and Reece have worked hard to ensure that there’s a pop heart pumping away underneath it all.

Into The Godless Void is perhaps the closest that this album gets to emulating the Trail Of Dead that wrote the likes of Source Tags & Codes. The usual …Trail Of Dead staples, a thundering drum track, a roared Reece vocal and a relentless sense of urgency define the track, but this is not the sound of a band trying to recapture the past, it’s the sound of …Trail Of Dead hurtling into the darkness of the void whilst carefully refining their sound once again. That they’re constantly surprising their fans, staying fresh, and creating music that still sounds impassioned and vital after 25 years together suggests that despite what we thought when the burst onto the scene, there’s plenty of life in …Trail Of Dead yet.