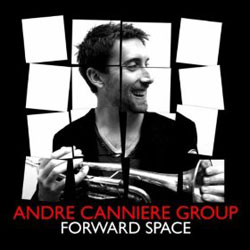 One of the great signs of the success of London’s thriving jazz scene is the number of musicians from the other side of the Atlantic now opting to base themselves in our capital city. Along with the great bass player Michael Janisch amongst others, trumpeter, composer and bandleader Andre Canniere has now built a considerable reputation in the UK.

Forward Space is Canniere’s first UK release, and see him working with some of the busiest musicians on the London scene, including guitarist Hannes Riepler (whose role here is pivotal), thoughtful pianist George Fogel bassist Ryan Trebilcock and drummer Jon Scott (Kairos 4tet, Dice Factory). On a number of tracks, the muscular, driving Chris Vatalaro (another emigrant from the US) takes the drum seat.

The music on Forward Space presents a powerful argument for directness and visceral experience in jazz. Whereas this music can sometimes obfuscate, or at least alienate non-musicians, the compositions here show what can be achieved from strong grooves and consciously restricted musical choices.

Perhaps the strongest example of this approach is the title track, a wonderfully effervescent and crisp performance, with melodic lines built from narrow ranges of notes. Perhaps most exciting of all is the section based on a series of syncopated rhythmic hits, over which Jon Scott takes a characteristically precise and musical drum solo. This approach to improvisation (and the drum solo in particular) is now in danger of becoming a cliche, but this ensemble’s delivery is more than committed and enthusiastic enough to retain a primal thrill.

Cure is a cinematic rocker, characterised by Riepler’s crunchy, distorted guitar and Vatalaro’s relentless, powerful drumming. It has a chromaticism reminiscent of old Bond themes. With its rawness and clarity, it is not without appeal (perhaps inspired by the likes of Acoustic Ladyland or Trio vD), but it’s certainly not the most original moment here. More interesting is the reflective, spacious September Piece, on which Canniere improvises with thought and sensitivity, with a really clear, ingratiating sound. It also features a beautiful solo from Riepler and exhibits another side to Vatalaro’s playing, with delicate brush work on cymbals creating a range of textures.

Canniere’s arrangements frequently use the guitar as a frontline instrument, either doubling or harmonising the melody. This leaves Fogel free to operate as the major harmonic force. When comping, Riepler and Fogel are both considered in their use of space, which really helps the music to groove effortlessly (the comping underneath Canniere’s solo on Lost In Translation is a great example of this). Ryan Trebilcock is a solid and disciplined bass player, whose presence here is also vital in making the music so exciting and well defined.