Andrew Bird – My Finest Work Yet 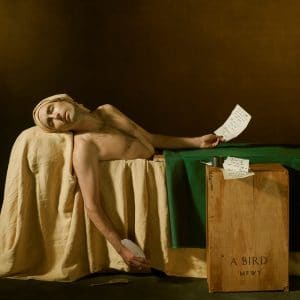 The role of whistling in popular music has not had a proud history. Pullover-bedecked folkie Roger Whittaker is probably whistling’s most famous proponent, and for every person who swoons as Otis Redding pursing his lips in Sittin’ On The Dock Of The Bay, there’s another who shudders in horror when the opening chords of Young Folks by Peter Bjorn & John start up.

Andrew Bird has been whistling away for 20 years, but there’s far more to his music than that gimmick. His last album, the instrumental Echolocations: River, was recorded in the Los Angeles River under the Hyperion Bridge, while My Finest Work Yet utilises a technique where all the instruments bleed into the microphones in exactly the right way, without using headphones or separation. Bird is a man who takes care over how his songs sound, and there’s a gloriously rich, warm atmosphere to this album.

It takes some chutzpah to call an album My Finest Work Yet, and you could be tempted to call it Trumpian, if Bird wasn’t such a self-effacing character. In fact, on this, his most political album to date, it’s clear that Bird sits on the opposite end of the political scale to the world’s most notorious businessman turned politician.

Bloodless is probably the album’s key track, looking at the divisive state of US politics, a state he likens to “an uncivil war”, and manages to throw in lyrical references to WB Yeats, Psalm 37 and Catalonia in 1936. It’s rare to hear politics tackled in such a subtle, intelligent and wordy way, and it’s a trick that Bird pulls off throughout the album.

Fallorun is another gem, whose upbeat, poppy nature contrasts with the anger of the lyrics which are a seething take-down of the 45th President Of The United States: “He’s just a mere conduit for all of your fears… such an abomination could be the man of the year”. What makes Bird different is that none of this political fire is delivered with a po-faced seriousness – you get the impression that most of his songs are delivered with a wry smile: take Archipelago, which name-checks both J Edgar Hoover and Godzilla, or Cracking Codes, where Bird admits “I know that what I say just sounds absurd, but you can read between the lines”.

Much of My Finest Work Yet is a natural progression from 2016’s Are You Serious, possibly Bird’s most mainstream work. That’s no criticism of course, as each song is intricately crafted and proudly wears its wordy intelligence on its sleeve. The opening track Sisyphus, for example, may be named after a boulder-challenged character in Greek mythology, but the gorgeous swell of the chorus means that it’s one of his more accessible songs.

There are nods to Father John Misty at times, although thankfully Bird stays away from the self-indulgence that has always been Josh Tillman’s weak point. It is essentially chamber pop, with songs like the aforementioned Archipelago being enhanced by a violin, or Proxy War being given added weight by a lilting string section. Olympians is about as raucous as things get, yet there’s still a restrained air of calm which anchors the song beautifully.

My Finest Work Yet an album that will immediately appeal to Andrew Bird’s long-term fans, and may well attract a few new ones as well. The title may well have been chosen ironically, but this is indeed his finest work yet – whatever your stance on whistling may be.