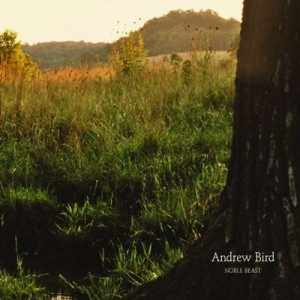 There’s been a definite journey in the music of Andrew Bird. Though he now resides firmly in the indie-folkie camp, he is a highly skilled violinist and his earlier work had a fuller feel that foregrounded his talents in this area; it is only in his later albums that he started to shift towards what is his now familiar sound.

His latest release, Noble Beast, has a more stripped down feel than its predecessor, Armchair Apochrypha, but the violin still puts in an appearance, as does his fondness for whistling – and, as ever with Bird, with song titles including Tenuousness, Nomenclature and Souverian, you wouldn’t want to play the man at Scrabble.

Though a melodic and often beautiful album, Noble Beast lacks the hooks of The Mysterious Production of Eggs it’s a slow build affair, rewarding but requiring concentration to appreciate all that’s going on.

A lot of these songs have been around in various forms for a while. The album kicks off with Oh No, the genesis of which he charted in a New York Times blog; it’s a song which he has been previewing live for some time, something that goes for a number of tracks on here.

Oh No is followed by the six-minuter that is Masterswarm, a strange meandering tale set to handclaps and strings that often sounds as if it’s being backed by one of the Clangers. A later song, Effigy, with its female vocal harmonies has a Celtic sound that recalls Damien Rice (in this instance at least not altogether a bad thing).

Though there are fourteen tracks on the album, three of these are short instrumental pieces like Ouo, a 20 second quiver of a thing that leads into the jangly Not a Robot, But A Ghost, a track which see Bird going a wee bit Thom Yorke-y as he repeatedly informs listeners “I cracked the codes.”

Bird’s voice is gentle and plaintive though he can do deep when he needs to. It’s a steady, warm sound, if a tad pedestrian at times. Lyrically speaking, the man likes his long words; he’s not scared of multi-syllables. Sometimes this can result in endearing lyrical cocktails, but it can also feel gimmicky and indulgent, and it sometimes feels as if a reliance on elaborate language is standing in for something deeper. This is particularly true of Tenuousness in which he takes pleasure in dissecting the word, stretching the syllables: it feels like a game he’s playing.

At times his approach can be repetitive – there’s a lot of whistling – but this is an album that slowly reveals itself to its listeners. While there are no tracks that etch themselves into your memory after one listen as there are on Eggs, his music is sonically adventurous and richly layered. There’s all manner of good things going on here and much pleasure to be derived for the listener.