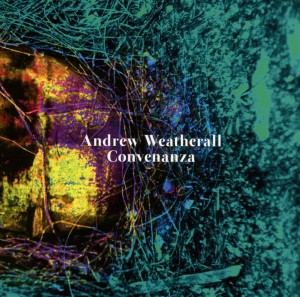 If electronic music had a royal family, Andrew Weatherall would surely be a member. He would make a good prince, rubbing shoulders with the great and the good, creating mayhem but still keeping the respect of his peers.

It is worth recapitulating his career to date, going right back to when he co-mixed the club version of Happy Mondays’ Hallelujah, was one of the producers on Primal Scream’s seminal Screamadelica album, and then went on to head up two of the most exciting electronic collaborations of the 1990s, Sabres Of Paradise and Two Lone Swordsmen. Add to this a large number of pioneering remixes and further production work, and you have just a hint of why he is held in such high esteem.

Weatherall doesn’t do solo albums very often, and this would appear to be his first since A Pox On The Pioneers from 2009. Listening to Convenanza sparks the thought it could easily be viewed as an autobiographical piece, summing up his musical legacy to date as he finds his feet in his sixth decade. It certainly brings forward the production sensibilities we have heard so far, but feels a bit lighter of touch, refusing to take itself too seriously.

The brief spoken word intro confirms this. “We appear to have got in with the wrong crowd” are the first words – and from there the loping groove of Frankfurt Advice kicks in, segueing into the lean bass of The Confidence Man. So far so good, setting the tone for a record where dub, electro and a heavier kind of 1980s pop are the three main styles of note. The gritty sound pictures of East London bring The Clash and The Specials to mind – and the groove in these two tracks is strongly reminiscent of The Magnificent Seven – while the deadpan vocals have a straight face but an upward trajectory.

There are no startling tunes here, but there are grooves aplenty. Kicking The River has a catchy vocal sound bite, as does The Last Walk, where a pastoral picture of neglected parks brings a little of England’s green and pleasant land to the darker landscape. There is wistful romanticism amidst the moody atmospherics, punctuated by fractured trumpet lines that Weatherall loves so much, as well as indeterminate bursts of distortion. The vocal from Nina Walsh on We Count The Stars matches the trumpet especially well.

Weatherall does most of the vocals here though, and they are clear and distinctive. The Last Walk is especially good, with its clever use of long words over another prowling bass. Kicking The River is rooted in the mid-1980s, while The Last Walk just pips Frankfurt Advice as the best groove on the album. There is a surprise in store at the end though, the soft hearted Ghosts Again employing wistful nostalgia and remembrance over a wide open texture. “Please forgive this letter from a shipwrecked soul”, it begins. The trumpet is notably softer as Weatherall’s discourse continues, winding up with the chorus “all prayers have failed to save me. Let’s conjure up the ghosts again”.

Yet Convenanza is essentially a good time record, a celebration that looks back, but doesn’t forget to put its best foot forward too. Weatherall’s position as one of our favourite princes of dance music remains assured, and at 52 he is still on fine form.