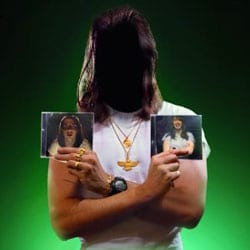 When Andrew WK arrived on the music scene back in 2001, the need for novelty – and controversy -was amply served. He was the bloody-nosed guy with the dirty white tee and matching jeans inviting you to Party Hard. Nearly a decade later, at age 30, he still has the long hair and still parties. Hard. So much so that his party tips on Twitter could be compiled into the ultimate book for party animals. From “Party ’til you puke” to “Pee in your pants; it feels so good!” Andrew WK is the self-proclaimed King of Partying. He’s arguably less well known for also being a savvy singer-songwriter, a talented musician and an exciting performer.

Back in the early 2000s, the British music press discovered on average one “savior of rock ‘n’ roll” per month, and Andrew WK was hailed as one of those artists who was going to change music, right up there with The Strokes and The White Stripes. But while these two latter bands kept going strong, AWK spiraled somewhat into musical oblivion after the flop of his second, and perhaps underestimated, album The Wolf. He went on to become a motivational speaker at several universities, perfect for one whose lyrics read like self-help mantras.

Now it seems he’s taking his own advice and blowing some steam. The party-hard boy is back with a double CD package including the unreleased “lost third album”, Close Calls With Brick Walls, and Mother Of Mankind, a compilation of rare and previously unreleased tracks. That’s 39 party pop-metal anthems with the same recurring theme: Be yourself. Have fun. And enjoy the art of carefully arranged noise.

After the perfectly arranged debut album I Get Wet, critics mistook him for a brand and were expecting more of the same on The Wolf. Now, on the first single I’m A Vagabond, he takes a dig at them: “So you’ve come to analyze me. Tell me where I belong.” So where does he belong? “This is my world,” he declares.

Close Calls displays a rawer facet – if that were possible – as well as more distinct and expressive vocals. It opens with the sober, piano-driven I Come For You, but it impresses with its streaks of experimentation peppered throughout – think Frank Zappa crossed with Mot�rhead. Las Vegas, Nevada races through with a fast fat rock sound, ’70s rock blares on Mark My Grace, and the piano-driven I Want To See You Go Wild is as ambitious as its sound. Dr Dumont and its mournful piano provide a brief pause, and while the party singalongs are still here – Not Going To Bed, for instance – AWK wants to show that he’s multi-dimensional. “The face that you see in the mirror/ Won’t be the same face when you look at it hours from now,” he sings on You Will Remember Tonight.

Mother Of Mankind is experimental at its best and self-indulgent at its worst. But even then it’s good. Twenty-one rare nuggets showcase his musical prowess and his party persona, enigmatic but always earnest and maybe closer to his trademark sound. We Party (You Shout) is the ultimate anthemic singalong and We’re Not Gunna Get Old declares rock to be the ultimate fountain of youth. The synths on Big Party give it a dance flavour, We Got A Groove is his take on disco-rock, while the organs on Who Knows lift it to a sci-fi dimension. Killer guitar riffs invite you on Let’s Go On A Date for a trip, which runs on into ’80s psychedelia on Sarah Notto. He concludes with the choir-driven The Party God, definitely the ultimate statement for Andrew WK.

While he has found success in other ventures, AWK warns about the hardships on Into The Clear, off Close Calls: “Whoever said that life would be easy never walked a mile in my shoes,” before adding: “I won’t give up.” On the evidence here, nor should he.