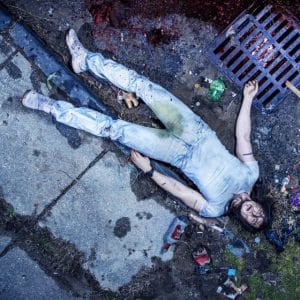 Andrew WK is a man of many talents. He’s a rock icon. He’s a survivor. He’s a man who really enjoys the white t-shirt and jeans combo. He’s a man who loves to par… Ok, you get the picture. Most importantly though he’s a man back with a new album that rages and blusters in a way that now suggests he’s got more on his mind than merely partying.

Andrew WK is on a one man crusade to fly the flag for rock, partying and being true to yourself. Here he does that again, though this time he’s tempered with a little self doubt, a touch of bleakness and a lot of anger. God Is Partying is not a celebratory triumph but the sound of Andrew WK looking inwards and questioning his place in the world. “Annihilate, annihilate, annihilate,” he sings on the swirling epic Babalon. Every note, instrument and sound here is played by Andrew himself and the album is distinctly in his vision. There’s precious little room for nuance and subtlety.

While the desire to explore his soul a bit deeper is laudable, it gives much of the album an earnestness that makes you long for the in-your-face rock anthems that he made his name with 20 years ago. Songs like Stay True To Your Heart and Remember Your Oath meander when they should soar, and having three songs clock in at well over six minutes is a bit much.

Fortunately, Andrew hasn’t completely abandoned the fun factor that made him so appealing in favour of existential dread and the straight ahead crunching riffs of Not Anymore and the rushing I Make It provide welcome relief. These lighter moments are in contrast to the widescreen epics that largely make up the record. He’s going for a darker sound, one which explores different themes than he is used to, but some of the resonance is negated by a reliance on grandiosity. Some judicious editing and pruning might have been preferable. Still, who’s going to tell Andrew WK what to do?

Twenty years from Partying Hard and Getting Wet, Andrew WK is still the same man but with different concerns. He still wants to party but wonders what the point of it all is. On his sixth album he takes his music further than it’s ever gone before and, if you’re a committed follower along for the ride, you’ll be there right with him.