by Aaron Payne
published: 3 May 2013 in Album Reviews
Tweet 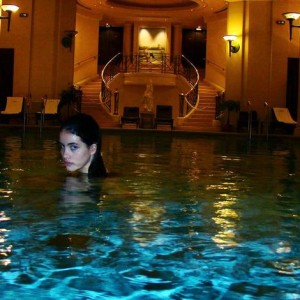 Descender is, apparently, an introspective exploration of Andrew Wyatt’s darker side. Judging by the evidence on the record, that darker side is one-dimensional and a little cartoonish. The Miike Snow frontman fails on the whole to find a spark that justifies either the heavy orchestration or the baffling mysticism of the lyrical content. What begins as a promising and ambitious album eventually becomes a disappointing lesson in the dangers of self-indulgence.

Descender isn’t an appalling album; it’s just really flawed. There are some pretty melodies, as on Harlem Boyzz and It Won’t Let You Go, and when the 75-piece orchestra is used in a controlled manner, it’s highly effective. It Won’t Let You Go, particularly, forces Wyatt to battle with the orchestra, and almost becomes exciting as it draws to a close.

The problems are mainly with Wyatt’s apparent lack of a sense of humour or humility. A YouTube documentary about the making of the album feels more like a particularly drab episode of The Mighty Boosh. It might be that Wyatt is joking, but the joke’s a subtle one if he is.

The problem is that, if certain tracks aren’t jokes, then they seem to be there just to make you angry. Two and a half minutes of aimless organ noodling, entitled Descender (Death Of 1000 Cuts), is utterly pointless noise. It’s not interesting noise. It’s not even momentarily diverting in a Revolution 9 kind of way. It’s just bad. On a nine song album, a filler track of complete drivel is pretty inexcusable, especially when you’ve made a documentary about it.

Another problem is the album’s lyrical emptiness. Songs about quasi-Bedouin self-discovery in the desert, about monsters, about drowning – it’s not completely clear what these are metaphors for, if anything at all. It’s all a bit facile and childish. Wyatt delivers the goods when he constructs an odd little narrative on Harlem Boyzz (“Things are getting kinda shakey down in Harlem/Crackheads falling through the banisters”). It’s the one song where it doesn’t sound as if he’s trying too hard. For the rest, Wyatt’s ambition overreaches his ability.

Descender is also very repetitive. The orchestration, competent though it is, is used in pretty much the same way across the album. The great orchestrated albums – Pet Sounds being the shining example – are witty and inventive in the way that they utilise the possibilities of orchestral sound. Wyatt sounds as if he’s happy just to imitate a fairly generic kind of Hollywood film music.

Ultimately, for all its pomp and ostentation, there’s just not much to Descender. The echoey, dramatic exterior masks a flimsy and half-baked set of ideas and experiments that might have been better left alone.