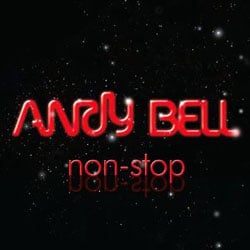 Poor old Andy Bell. He’s always been one to arrive a year or two late at the party. Erasure, joyfully cheesy as they were, left it until 1986 to release their first album; cementing their status as the also-rans of ’80s synth-pop. Never taken wholly seriously, they played out as the campy, superficial younger brothers to the Pet Shop Boys. And now, just as the electro revival starts to wane, Andy Bell releases an album of electro dancefloor anthems. Naff? Ah, who cares: it’s not as if such accusations have ever put him off.

Naffness aside, anyone who’s in the market for mainsteam dance music will have a serious bone to pick with Mr Bell here: Non-Stop sounds exactly like Madonna‘s Confessions On A Dancefloor. It’s one thing to arrive late at the party; it’s quite another to find that Madonna has got there first and scoffed all the vol-au-vents.

Just like Madge’s silver jubilee album, Non-Stop is intense, repetitive, medium-to-dark electro-house music. Like pretty much everything Madonna does these days, it’s co-written with a credible genre producer (here it’s Pascal Gabriel). The spaces between the songs simply aren’t necessary: to all intents and purposes it’s a megamix of three-and-a-half minute floor-fillers.

Musically, it’s slick, professional and knowingly referential. It’s either perfect or deathly dull, depending upon your level of predisposition to electro-house music. However, the slick adherence to formula has the unfortunate effect of rendering Andy Bell’s lyrical and vocal contributions pretty much redundant. For one thing, while the music smacks of 3am e-fuelled hedonism, Bell’s voice sounds as boyish and na�ve as it did in Erasure. And, more often than not, Pascal Gabriel has only left enough quiet bits for Bell to drop in short, glib rhyming couplets about seeing a nice piece of ass under the disco ball, having a shimmy with him, popping home for a spot of how’s-your-father, and so on.

Perhaps there’s something to be admired here. Most men approaching 50 spend their Saturday nights watching Britain’s Got Talent and farting silently into the sofa; at least Andy’s out there meeting new people.

And then, just when you think you know exactly where you stand with Non-Stop, Andy Bell pulls something quite magical out of the bag. No, it’s not a bottle of poppers; it’s Perry Farrell, the legendary Jane’s Addiction frontman! His appearance shouldn’t come as a surprise: after all, he does bear an uncanny resemblance to any of the gaunt, ketamine-addled 50-year-olds to be seen stumbling around Vauxhall of a Sunday morning: the supporting cast of this album, if you will.

Written and co-performed by Farrell, Honey If You Love Him is streets ahead of anything else on Non-Stop: both cleverer and weirder than the Madonna homages which precede it. Echoing Sparks‘ late-’70s disco period, it’s hugely infectious, with a deftness of touch and sense of humour which is missing elsewhere. “I’ve got to confess / your ex was the hotness,” hisses Perry with bug-eyed Russell Mael creepiness.

In all, nothing to dislike here – but surely there are more satisfying jobs than hoovering up Madonna’s crumbs.