Ane Brun – After The Great Storm 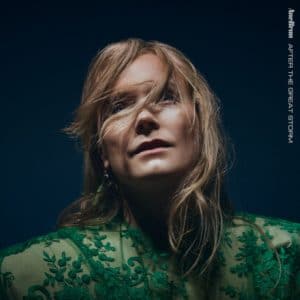 Great news for Ane Brun fans: the Norwegian artist has not one but two fine albums out this autumn, with After The Great Storm set to be followed next month by How Beauty Holds The Hands Of Sorrow.

This isn’t some kind of attempt to see how little time she can leave between albums; the two records mark the end of a creative dry spell Brun suffered after the death of her father in 2016. Once she was able to successfully write again, she found herself with enough material for a double album – but the songs she amassed naturally divide into two rather different moods, and hence two different albums.

After The Great Storm seems logically placed as the first release; it follows on quite neatly from her last album of original material, 2015’s When I’m Free, sharing its scale and ambition, and the trip-hop undercurrents that interrupt a pop sheen. Its nine songs deal equally with personal relationships and with bigger questions of how we live in our world, and opening track Honey brings together these two strands. Here, Brun sings words of reassurance and advice to her 18-year old self – it’s reminiscent of Sharon Van Etten’s recent single Seventeen, but less jaded and more caring. “I know how things will come back to haunt you,” she sings, a reminder that our actions as both individuals and as a society have consequences.

Musically, it’s more ambitious and further reaching than any of Brun’s previous records. While tracks like Honey and the super-smooth Fingerprints are wonderfully polished, their mirror-glaze can feel a little too dazzling at times. They cry out for a jolt that can puncture that smooth surface and take us deeper; Brun’s voice does that to some degree, but sometimes finds itself floating rather than diving.

However, a fine trio of songs cuts across the centre of After The Great Storm. Crumbs is Brun at her most indie-pop, riding on a punchy drum beat that sounds like something The National’s Bryan Devendorf might beat out. The lysergic Feeling Like I Wanna Cry feels like it might warp and fold in on itself at any minute, while Take Hold Of Me builds from a simple synth arpeggio to a track that’s not a million miles from some of Jon Hopkins’ recent work.

The final song, We Need A Mother, grapples most closely with crises of the human race. It has its origins in a conference Brun attended, in which a speech about climate action was followed by a huge display of resource-burning fireworks. “I feel rage,” she sings, but she sounds more tired than angry. Rather than coming to any kind of climax, the track peters out with a question: “Will we catch the rope at the very last second?” It’s an ambiguous line, hopeful but also doubtful, and as the end of the album hangs on that ambiguity it’s comforting to know that Ane Brun will be bringing us another record in a few weeks’ time.