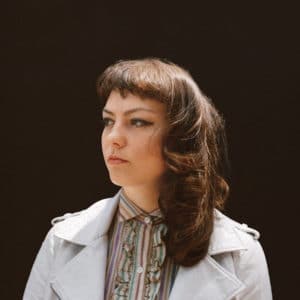 When Angel Olsen first appeared in 2011 with her debut EP Strange Cacti, she seemed like the very epitome of the lo-fi singer/songwriter – the cassette-only releases, the collaborations with the likes of Bonnie Prince Billy, and the fragile, fractured nature of her songs which often sounded like they were being delivered from another world.

Five years on, it’s impressive to note Olsen’s evolution: the opening track on My Woman, Intern, could be by a complete different artist – it builds slowly up and up until it’s pretty much sizzling with synths. While her previous album Burn Your Fire For No Witness seemed like a huge step up for her, My Woman seems even more like a statement.

While Olsen’s sound may have changed over the years, her emotional pull remains. Almost every song on My Woman drips with longing and yearning – Never Be Mine is a perfect distillation of unrequited love (“I would watch you, I would watch you turn and walk away, I would watch you look right through me, right through every word I say”), and Shut Up Kiss Me is a frantic, breathless take on trying to keep a relationship together even in the toughest of times (and Olsen even throws in a lyrical namecheck to Bob Dylan‘s It’s All Over Now Baby Blue towards the end).

It may be down to the somewhat surprising presence of Charli XCX producer Justin Raisen, but there’s certainly a punchier, more accessible feel to My Woman, at least in it’s first half. Despite the pain and vulnerability on display, the opening five songs are all relatively poppy – the likes of Shut Up Kiss Me or Give It Up are so naggingly catchy that they should come with a health warning.

In the second half of the album, Olsen’s slower, more languid songs come to the fore. While these may not be as immediate, they’re equally as affecting with the seven minute long album centrepiece Sister being an obvious example. It starts off by harking back to Olsen’s early work, being a sparse acoustic number, but soon settles into a comfortable sprawl, echoing ’70s FM rock at times, before ending on a truly epic guitar solo. The fact that the phrase ‘epic guitar solo’ can now be used in an Angel Olsen review shows how far she’s developed.

Sister effortlessly segues into Those Were The Days, full of breathy, wistful vocals and cloaked in regret, while Woman is another seven minute plus that ebbs and flows beautifully before Pops closes the album in desolate fashion, just Olsen and a stark piano bringing up memories of Cat Power at her most minimal as she contemplates a life beyond the disintegrating relationship she’s singing about: “I’ll be the thing that lives in the dream when it’s gone.”

With every album she releases, Angel Olsen seems to step up a gear. As My Woman will comfortably be seen as one of the best albums of the year come December, it’s a head-spinningly exciting prospect to think where she’s going to go next time around.