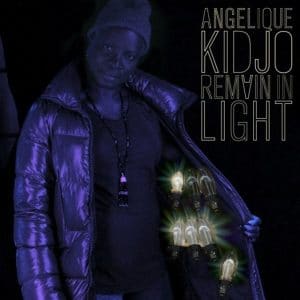 In 1983, Angélique Kidjo fled fear in the then People’s Republic of Benin, West Africa and travelled to Paris, aiming to study jazz at the Centre d’Informations Musicales. It wasn’t as an easy move to make, and she experienced prejudice, both outside and inside the school. (“On the first day,” she told the Guardian in 2010, “two white girls said to me: ‘You’re African, right? Jazz is not for African people’”.) Made to feel so out of place, she was heartened to hear something at once strange and familiar, at a party she described recently to the New Yorker Radio Hour. “Somebody put Once In A Lifetime on, and I saw everybody start dancing” she said, regarding her first exposure to Talking Heads’ Remain In Light. “I’m like, ‘these musicians are African?’”. “’No!'”, her friends snapped back, “‘they are white Americans… and before you say it comes from Africa, shut up! It’s rock’n’roll!’”.

And it was, if only after a fashion. Following a process started by Fear Of Music’s hypnotic, tribal I Zimbra – and continued through David Byrne and Brian Eno’s work on My Life In The Bush Of Ghosts – sample clearing for which delayed its release until 1981 – Remain In Light (1980) saw Talking Heads moving further from what Kidjo’s friends might have called ‘rock’n’roll’ than they had before. They were assisted in this by Eno, his role more band member than producer, his instrument the studio. (“You’re working directly with sound”, Eno had said in his 1979 lecture The Studio As Compositional Tool; “and there’s no transmission loss between you and the sound – you handle it”). But as both Eno and Byrne would acknowledge, the album surely wouldn’t be shaped anything like it was without influences drawn from of African music, in particular the Nigerian multi-instrumentalist and bandleader Fela Kuti.

An album to be lived inside, its grooves boundlessly sustaining, Remain In Light frequently tops lists of Talking Heads’ best albums – an entirely correct opinion – and was recently added to the Library of Congress’ National Recording Registry. And it still sounds staggering almost 40 years on. Which is about where Kidjo came in, having not investigated past …Lifetime until 2016, despite her and Byrne’s longstanding mutual appreciation. Kidjo not only heard the influence of African music as strongly as she did in 1983, but saw parallels between the political moment surrounding the album’s release and now, along with opportunities to bring “the resilience of Africans” to bear on the songs’ meanings and moods.

It’s not the first time an artist has released a song-by-song reinvention of an album: take Dirty Projectors’ Rise Above, a barely-remembered take on Black Flag’s Damaged, Camper Van Beethoven’s frazzled cover of Fleetwood Mac’s equally frazzled Tusk or Ryan Adams’ beigewashing of 1989. (And Remain… itself was covered in full by New England jam band Phish, casually slotted into a near four-hour live album.) But it’s the balance between reinterpretation and reverence which works so well here, and makes Kidjo’s version worthy of attention, no matter how fond or familar the original might be. Often, what Kidjo and her band – who stretch from Benin to Martinique to Cardiff, and include Kuti drummer and Afrobeat legend Tony Allen and fretless bass whiz Pino Palladino – are doing is more like remixing. They’re teasing and stretching details of the original arrangements, amplifying and augmenting; Kidjo is translating both musically and literally, with select lines – and some of her own words – delivered in the Beninese languages Yoruba and Fon.

There’s Born Under Punches, its blows more muscular, forcing the hands of the oppressor. Or Crosseyed And Painless, a feast of rhythm from Allen and percussionist Magatte Sow, with a stronger groove, stabbing horns, and a snippet of Fela Kuti’s Lady (“She go say, ‘I be lady, oh’”) bringing the project full circle. Only The Great Curve doesn’t quite offset what it loses in nervy, frantic energy and Adrian Belew’s metallic shrieking, divebombing guitar – here replaced with a distinctly hairier freakout by Devonte (Blood Orange, Lightspeed Champion) Hynes – with its bolder brass arrangements of the original’s synth parts.

Elsewhere the differences are more pronounced. The carnivalesque, euphoric Once In A Lifetime for instance, which casually sidesteps over-familiarity. In particular, Kidjo’s Remain In Light comes into its own in its latter half, speaking fluently rather than hiding behind a phrasebook. Seen And Not Seen swaps Tina Weymouth’s sparse pops and slaps for an equally excellent, almost avant-funk bass part, over which Kidjo adds poignancy and meaning to lines about changing appearance to fit a popularised ideal. Listening Wind, meanwhile, adds layers of echoing vocals – with contributions from Vampire Weekend’s Ezra Koenig – and replaces the violin-like guitar squeals with a driving synth line; a warmer treatment (particularly contrasted with Peter Gabriel’s skeletal 2010 reading) which approaches its now sadly no less controversial subject – a desperate act of terrorism – with honesty. The Overload, finally, might even improve upon the bleak, almost suffocating closer, with echoing flute parts and backing vocals – again translating the original lyrics – which add melody and momentum.

It would be very easy now to frame this as a story of Kidjo reclaiming the influence of African music from Talking Heads, of cultural re-appropriation. But Kidjo doesn’t see it that way, reminding NPR that Remain In Light’s original the press release mentioned “the fact they were listening to Fela when they did this album. They were reading [African Rhythms and African Sensibility by] Chernoff, and they tell people, ‘You want to understand our album? Listen to Fela and read the book’”. She feels that she’s just ‘paying back the homage’. And with it, she’s bringing a perspective which is often fascinating, but never less than interesting.