by Martyn Young
published: 13 May 2013 in Album Reviews
Tweet 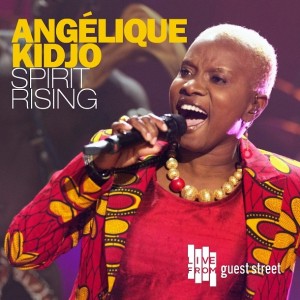 Spirit Rising is a recording of a live show, which highlights the breadth of veteran Beninese singer Angélique Kidjo’s influences. The set spans both her own well received and much loved material as well as a choice selection of covers that have particular relevance to the singer.

In some ways this set, recorded live in Boston, acts as something of a best of collection for this most invigorating of artists. Perhaps the most striking thing about Kidjo is her force of personality and all that exuberance, ebullience and rich warmth is present here. Kidjo acts as the engaging focal point for a supremely classy and nimble band who flit wonderfully between upbeat afrobeat party jams like the delightful Agogo and Batongo and the more low-key and reflective covers that illuminate the set. It’s a live album that excels in terms of pacing and dynamics.

While the band are proficient it’s very much Kidjo who is the star. She acts as the conductor for a celebratory show, both for her own career and for African music in general. Something of a figurehead for African music these days, an image fostered over a 25-year plus career, Kidjo’s career has taken her to many places and seen her fight many battles both politically and socially. There’s an awful lot to pack into a career spanning set, but Sprit Rising does a fair job in acting as a viable starting point.

While her gloriously rich and rousing material has its own innumerable charms, the choice of covers is perhaps less successful. A version of Bob Marley’s Redemption Song with a gospel choir fails to truly soar as you feel it should, despite the obvious passion in Kidjo’s voice. Another curious choice is a rather stilted version of Ravel’s Bolero, featuring saxophonist Branford Marsalis. In a set of stirring party rhythms and impassioned anthems, this curiosity rather jars.

Far more successful are the meatier and more satisfying upbeat covers that play to Kidjo’s obvious strengths as a powerful and charismatic performer. A version of Gimme Shelter with special guest Diane Reeves is a real joy. Taking the Rolling Stones’ original’s dark voodoo vibes and imbuing them with a dizzying melting point of afrobeat sounds and rhythms, the pair trade verses and lines with increasing power. It’s a thrilling episode on a live album that otherwise rather lacks in truly outstanding moments. Equally as invigorating is a piano led romp through Monfe Ran E, on which both Kidjo and Reeves sound like they are having the time of their lives. It’s an infectious joy that transmits to the listener.

On a record where Kidjo pays tribute to some of her musical influences in Bob Marley and Curtis Mayfield it’s intriguing that the one modern track she chooses to cover is I Think UR A Contra by Vampire Weekend, a band often hailed for their affinity with African music. Here, Kidjo is joined by the New York band’s singer Ezra Koening for an understated and unexpected highlight. Their voices work wonderfully together in symbiotic unison. It acts as a symbolic moment as Kidjo acknowledges a new breed of musicians taking influence and inspiration from African music.

Angelique Kidjo is a formidable performer and artist. While Spirit Rising does not manage consistent excellence, it does more than enough to cement her reputation as one of her generations pre-eminent artists.